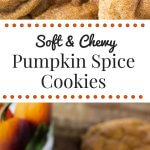 These pumpkin spice cookies are soft, chewy and perfect for fall. They’re filled with flavor thanks to the pumpkin, vanilla extract, & fall spices. Then they’re rolled in cinnamon sugar for a delicious coating that’ll remind you of snickerdoodles.

Can you believe we’re already almost half way through September??? Have you been hopping on the fall bandwagon? Raking leaves & picking apples?

Last weekend I spent Saturday enjoying the sunshine (and getting a sunburn). Then Sunday arrived and  fall came overnight. The air was crisp, the leaves were yellow & orange, baristas were in full force making pumpkin spice lattes, and everyone made the wardrobe transition from cutoffs to cable knit sweaters. Seriously, the fall-ness was in overdrive.

Now, when it comes to fall – I always feel like there’s 2 groups of people: the ones rejoicing and the ones dreading the end of summer. I typically fall into the latter, but I love fall because it’s the perfect excuse to get back in the kitchen and start baking. I’ve been slacking.

So to start off the autumn inspired treats (even if you’re still lounging by the pool)- today we’re making pumpkin cookies. Soft, chewy, never cakey, pumpkin cookies that are filled with vanilla, spices and brown sugar goodness. 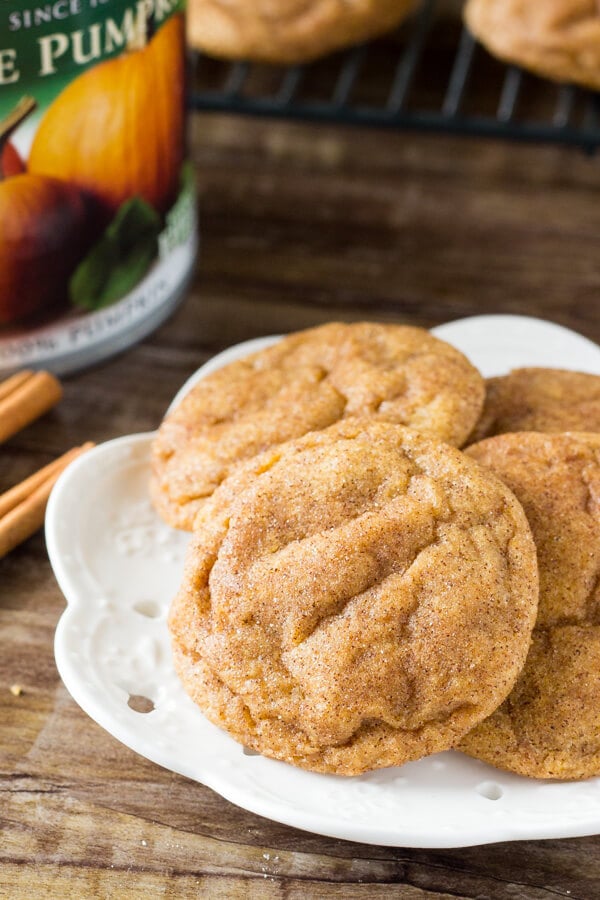 Think of them like pumpkin snickerdoodles. Or the fall cousin of soft & chewy ginger molasses cookies. Seriously, the flavor is off the hook.

So what makes these pumpkin spice cookies so delicious you ask????

First, we’re starting with real butter (not margarine or shortening) for the most flavor. Then we’re using a combo of brown sugar and white sugar. Whenever I can use brown sugar in baking, I almost always opt for it because it adds a delicious caramel undertone and creates super chewy cookies. A total win-win.

Then we’re adding lots of vanilla (no skimping here), and a combo of cinnamon, nutmeg & ground cloves. The star of the show is obviously pumpkin – but it’s the brown sugar, vanilla & spices really make it shine. It’s a fall party of flavors. And me & my cable knit sweaters, fall booties and plethora of scarves are joining in on the fun.

One of the really important things I wanted in these cookies was for them to be chewy & cookie-like in texture. We add a lot of moisture with the pumpkin, so we need to be careful. To combat the extra moisture/water added with the pumpkin – you’ll notice that there’s only 1 egg in the batter. And we’re using cornstarch and cream of tarter to keep them soft and chewy. 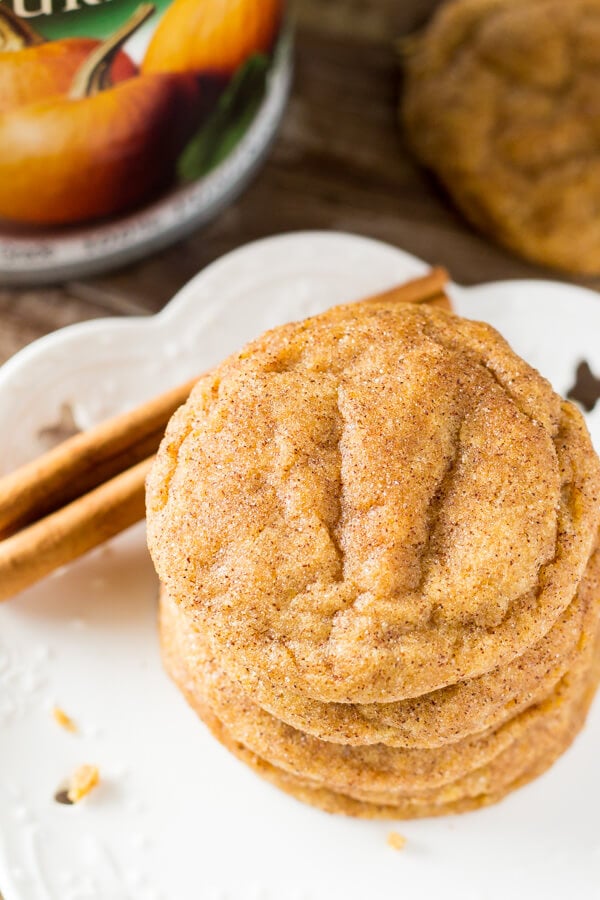 Then the cookie dough is chilled prior to baking, and we’ll form the dough into balls and roll them in cinnamon sugar. Could you honestly think of anything better???? The cinnamon sugar adds a delicious coating, extra cookie texture, and that perfect snickerdoodle-esque appearance. Seriously, the deliciousness factor of these pumpkin cookies is off the chain.

If you love pumpkin – make sure to try these favorites too: