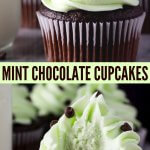 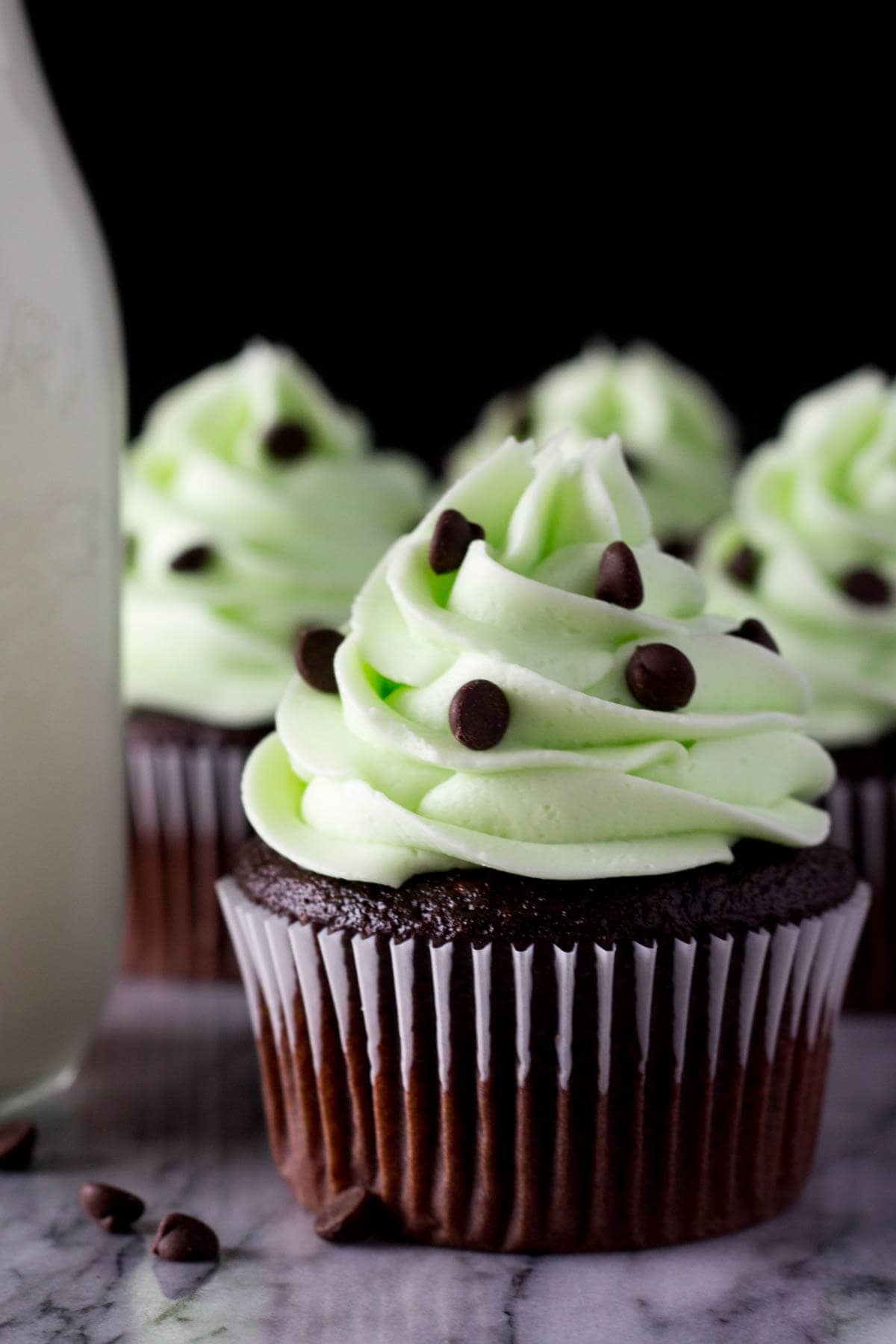 Seriously. These are the softest, most delicious, most chocolate-y chocolate cupcakes. Then we’re topping it off with creamy, smooth mint buttercream frosting and sprinkling with chocolate chips. So you get all the delicious flavor of mint chip ice cream, without having to wait for ice cream weather.

You see – growing up, mint chip ice cream was my favorite. Probably because it was my older sister’s favorite and my greatest desire was to be her twin. Which she fully exploited for her  personal gain. But she had excellent taste in ice cream. So all’s well.

One fateful summer afternoon she was taking me for ice cream. But tragedy struck as I dropped my ice cream money down the cracks of the ice cream parlor’s large wooden veranda. I watched in slow motion as the best day quickly turned into my worst nightmare. And from then on – the flavor just seemed cursed.

But after years of avoiding mint chip ice cream the curse has lifted and I’ve been blessed with the most delicious Mint Chocolate Cupcakes. And I’m sharing said cupcakes with you – my internet friends. They’re so, so moist & chocolate-y with the softest cupcake crumb. And the frosting – literally mint chip ice cream in frosting form. Seriously, the stars aligned for these delicious morsels.

What makes the cupcakes so soft & moist is the fact that we’re using oil, 2 eggs, sour cream & buttermilk in the batter. Whoa there. Now, I’d NEVER recommend using oil in vanilla cupcakes. But in chocolate cupcakes the rich flavor hides any taste of oil and the oil makes your cupcakes ridiculously moist. Then eggs for tenderness, sour cream to combat dry cake crumbs, and buttermilk for the softest cupcake texture. Perfection.

The frosting is adapted from a classic vanilla buttercream – with the addition of mint extract and a few drops of green food coloring. You can adjust the level of minty-ness depending on your preference. And I must say – the combo of rich chocolate cake and creamy, mint buttercream is pure cupcake bliss.

These are actually my new favorite cupcakes. And the fact that I can have mint chocolate deliciousness without waiting for summer heat and ice cream treats – is just one more thing to love. 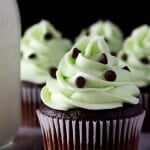 For the Mint Buttercream

*Homemade buttermilk can be made by adding 2 teaspoons of distilled vinegar to a liquid measuring cup. Then fill with milk to the ⅔ cup line.
**Whipping cream can be replaced with milk. The frosting won't be as thick though.  ***If you're planning to frost the cupcakes with a knife instead of piping, you won't need to make as much frosting. Instead, use 1 cup butter, 3.5-4.5 cups powdered sugar, and 2-3 tablespoons whipping cream.