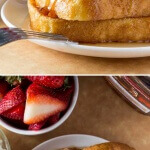 My favorite breakfast – fluffy, buttery, topped with fresh fruit, drizzled with maple syrup and no questions asked – the BEST French Toast ever. 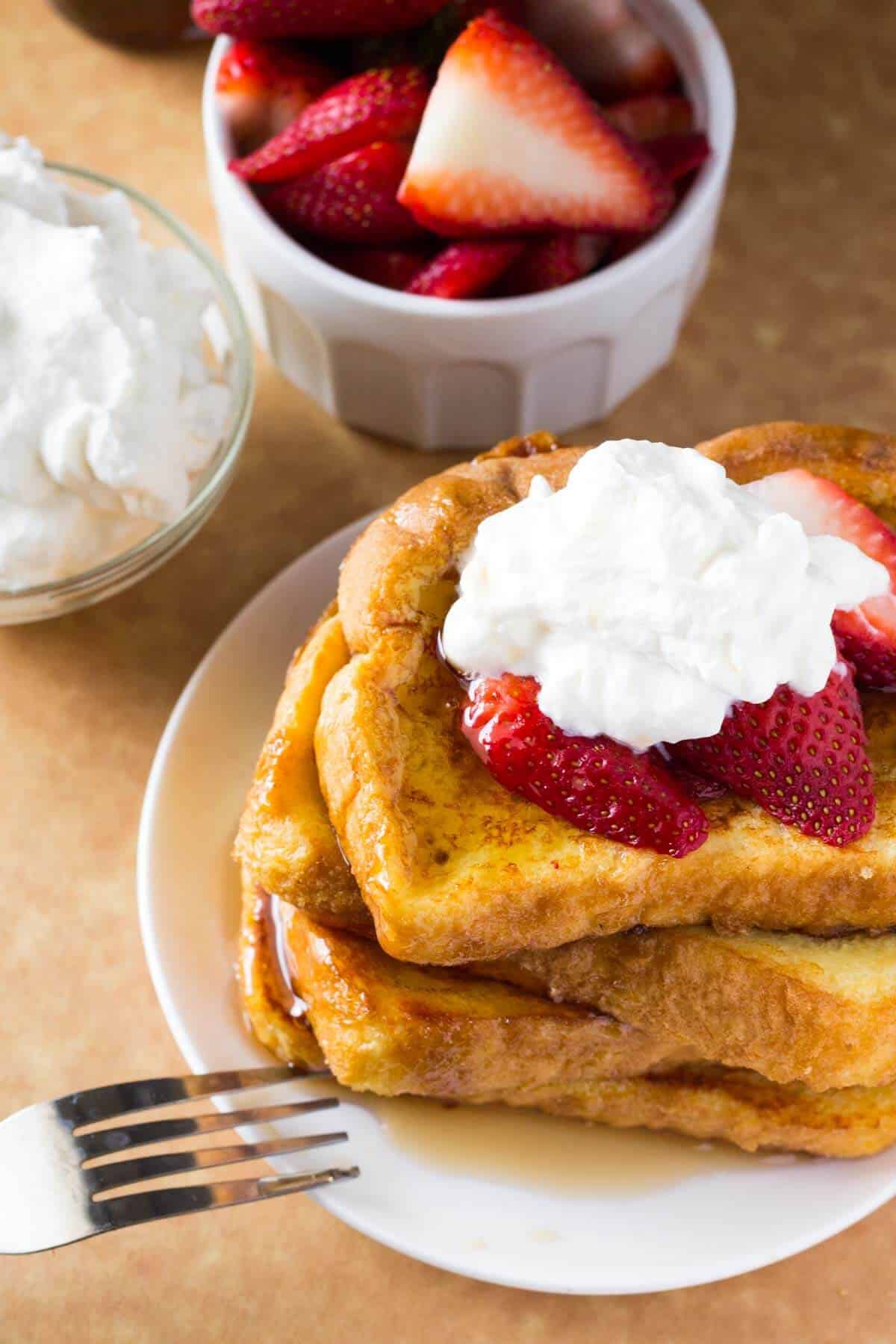 This french toast recipe is my absolute favorite. It turns out fluffy with golden edges, and  a delicious buttery flavor with a hint of cinnamon. I’ve been perfecting the recipe for years – so when I say that this is the best french toast recipe, I really mean it.

You see, for literally 2 years I relied on a diet of eggs, toast, coffee & take out. Not like burgers and fries take out – but like the slightly classier noodle bowls & sandwiches type of take out. Disgraceful I know. But I lived by myself in a bachelor apartment. And I was seriously that lazy.

While I could count on one hand the number of times I made supper in those 2 years, making French Toast was a regular occurrence. It was a Sunday morning ritual. A little piece of kitchen heaven.

And I truly believe Jay thought that I was a one-trick kitchen pony incapable of turning on the oven.

But in those 2 years of Sunday morning French Toast breakfasts – I became a French Toast connoisseur. A master of French Toast Pastry Arts if you will. Not to sound arrogant, it’s just that if you only cook one thing – you better be good at it. 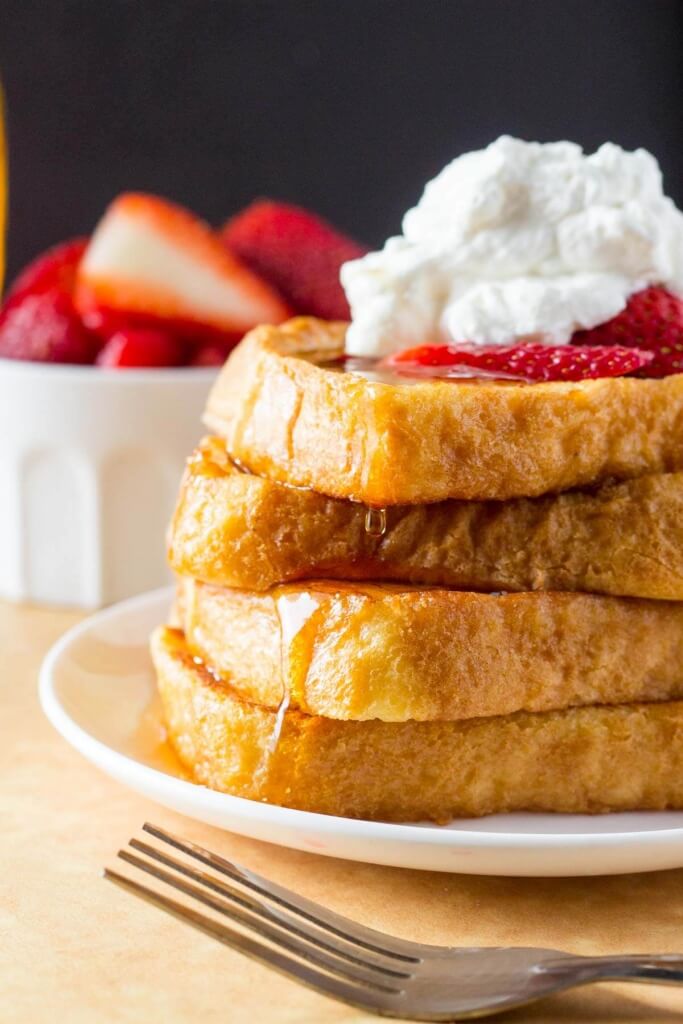 So today, I’m sharing with you my recipe for the BEST French toast that I perfected over those 2 years of mastery. It’s fluffy and thick with perfectly golden edges – and the most delicious buttery, cinnamon flavor. Of course with a healthy portion of fresh fruit, whipped cream & drizzle of maple syrup you can’t go wrong either.

Now, I realize here that the best French toast might seem silly since the recipe is pretty basic. But after countless Sunday mornings altering ratios – this recipe is perfection.

So here’s our secrets: 1 extra egg for a richer taste, a little sugar for golden edges, 2% or whole milk for a creamier flavor, and adding a little melted butter to the batter for…. well… a more delicious buttery taste. A healthy dose of cinnamon always helps too. 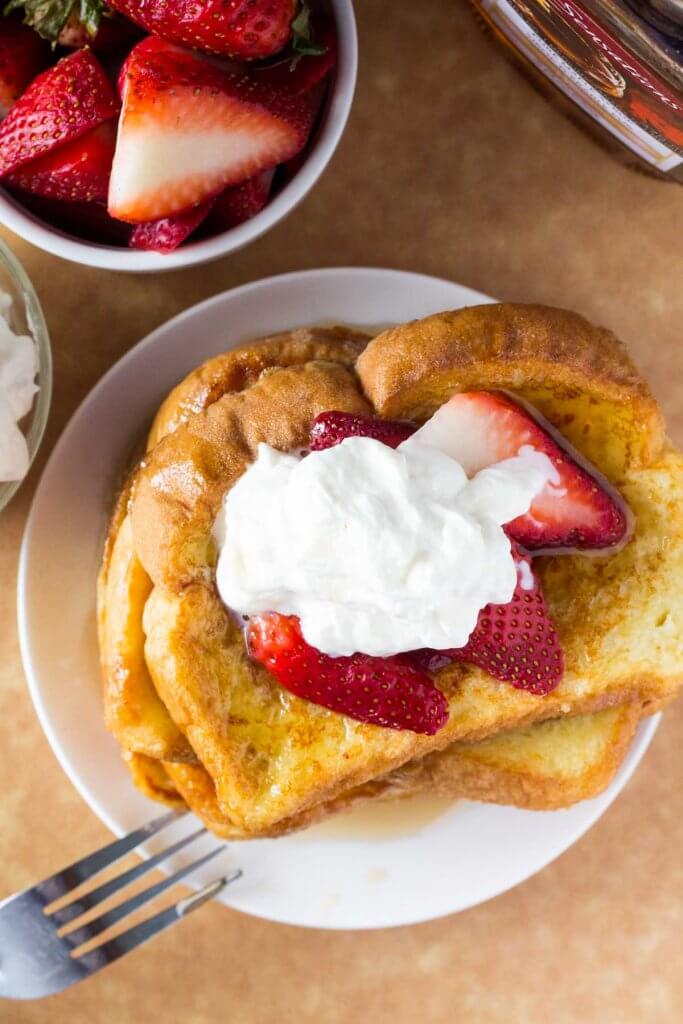 We’re also using thick-cut white bread here so that it can soak up more of the batter to have the perfect fluffy texture. Really dunk your bread into the egg & milk mixture so it’s fully submerged, then shake off any extra batter before placing it on the griddle.

It’ll cook for a few minutes on each side til it’s golden brown in color and puffed up nicely. And then. It’s time to eat. 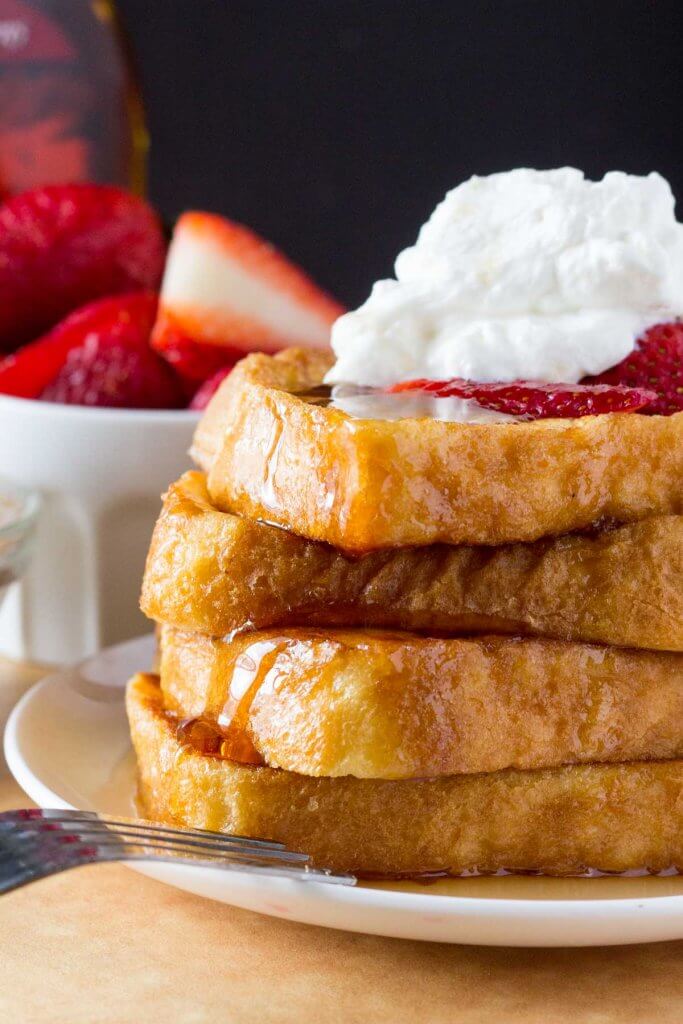 That’s what I love about breakfast foods. Simple ingredients. So easy to make. And ready in no time. Because perfect buttery, fluffy, cinnamon-y French toast that’s drizzled with syrup, topped with fruit and garnished with whipped cream is the best excuse for getting out of your bed. (I fully endorse staying in your pajamas all day). 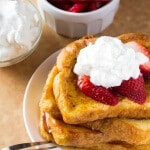