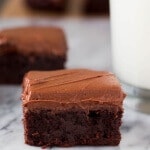 Super moist, super fudgy and slathered with a thick layer of cream cheese chocolate frosting – these brownies will be your new favorite. 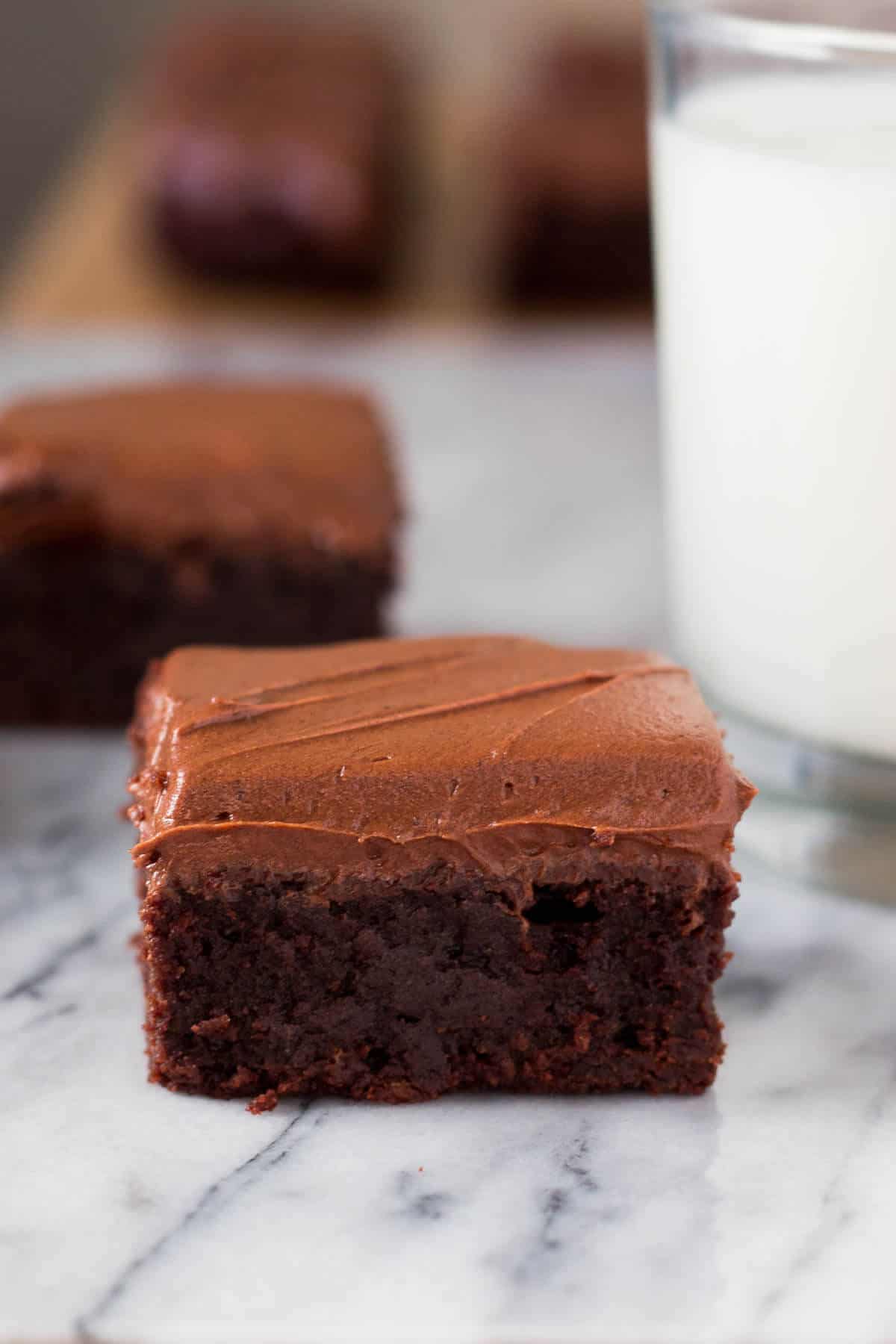 I have a love affair with brownies. Fudgy, dense, chocolate-y. I’d opt for Birthday Brownies instead of Birthday Cake any day.

Now – I love my Triple Chocolate Brownies but recently I’ve been on a quest to create the ultimate fudge brownies with chocolate frosting. Brownies that are chewy, fudgy, super moist AND can smothered in a thick layer creamy chocolate frosting without being too sweet.

You see, my Triple Chocolate Brownies are the type for eating with a spoonful of ice cream and chocolate sauce. But sometimes you need that classic frosted brownie like the ones you buy in a giant slab from the corner bakery.

And today – I have the perfect recipe. They’re dense, fudgy and have a delicious chocolate flavor without being too rich or bitter. Then to top it all off, they’re frosted with cream cheese chocolate frosting. The slight tang of the cream cheese pairs so perfectly with the chocolate and balances out the sweetness.

These really are the perfect fudgy frosted brownies and they aren’t the least bit cakey or dry. So let’s go through what makes them so dense & delicious. First this recipe uses cocoa & lots of butter. I wanted to use cocoa so that you can quickly whip them up the moment the craving hits – without having to go to the grocery store to buy dark chocolate. However, because we’re using cocoa we need to add in extra butter for more fat.

Then an extra egg yolk adds even more tenderness, and brown sugar for more moisture. I stuck to a combo of brown sugar & granulated/caster sugar as to not stray too far from that classic brownie recipe using all granulated sugar – but the brown sugar definitely adds to the fudginess. Then for the final secret ingredient – we’re actually adding a little corn syrup to the batter. It seriously ups the chew factor.

It’s also very important not to over mix the batter. Otherwise – they your brownies can go from fudgy to cakey pretty quickly. Say goodbye to the electric mixer.

And last but not least, be careful not to over bake. The difference between a few minutes can take a deliciously fudgy, moist brownie to dry and tasteless sad brownie. So watch carefully and don’t be afraid to take them out of the oven a little early – they’ll continue baking as they cool in the pan.

And then that frosting – Oh my…. I’ve honestly debated if I should even make the brownies and not just go straight for this Cream Cheese Chocolate Frosting. It’s creamy. It’s not too sweet. And it’s so delicious. You’ll notice that the recipe makes a rather large amount – but I don’t think anyone will be complaining about the thick slather of frosting on top.

For the Chocolate Cream Cheese Frosting