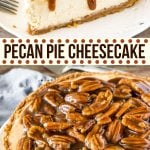 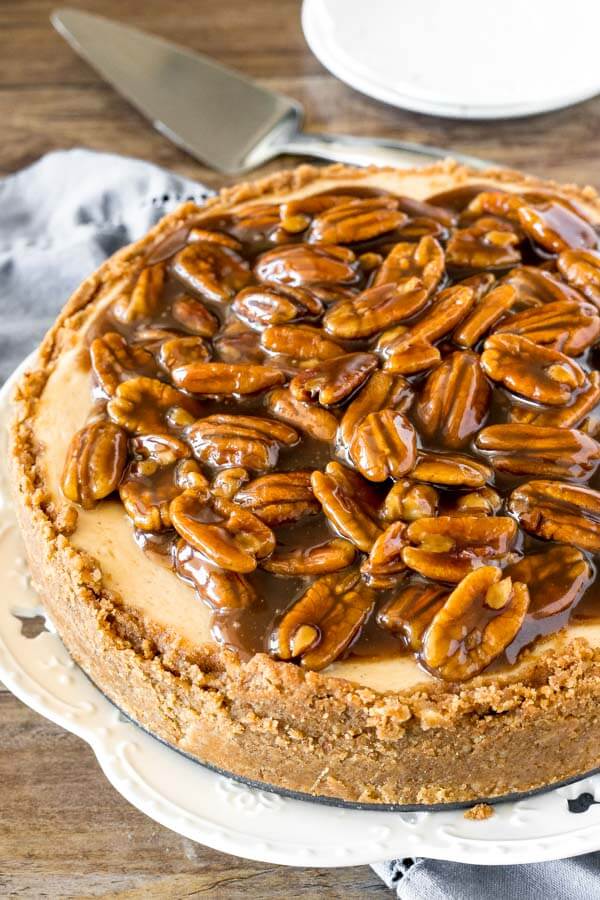 This pecan pie cheesecake combines two classic desserts: New York cheesecake and pecan pie. It has the crunchy graham cracker crust, tangy flavor, and velvety smooth texture that you know and love from cheesecake. Then we’re adding pecans to the crust, and a delicious brown sugar pecan topping to give it the buttery, caramel, nutty flavor of classic pecan pie. It takes a little extra effort than making a plain cheesecake – but it’s 100% worth it.

It’s the perfect twist on cheesecake, and the perfect way to take your pecan pie up a notch. I also love to serve it for Thanksgiving as an alternative to all the pumpkin desserts.

There’s 3 parts to making this cheesecake: the crust, the cheesecake filling, and the pecan topping. When making cheesecake, each ingredient has an important role. So unless otherwise stated – I do not recommend any substitutions. I’ve gone into lots of detail as to why each ingredient is important, with the full recipe in the card below if you scroll down. 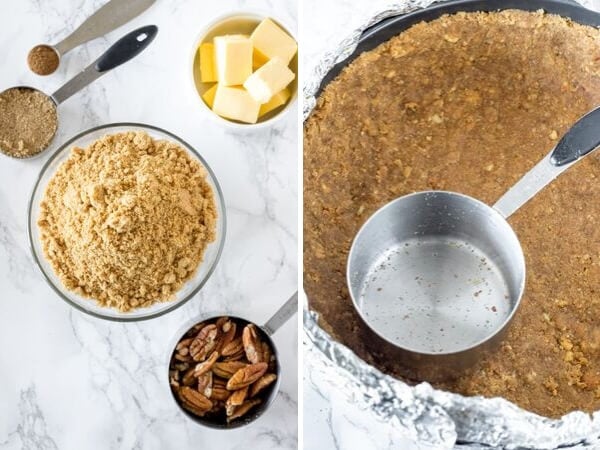 You’ll beat the cream cheese until soft, then mix in the sugars, corstarch and flavorings. Once smooth, the sour cream is mixed in, followed by the eggs. You’ll want the cream cheese, sour cream and eggs room temperature before getting started for easier mixing. 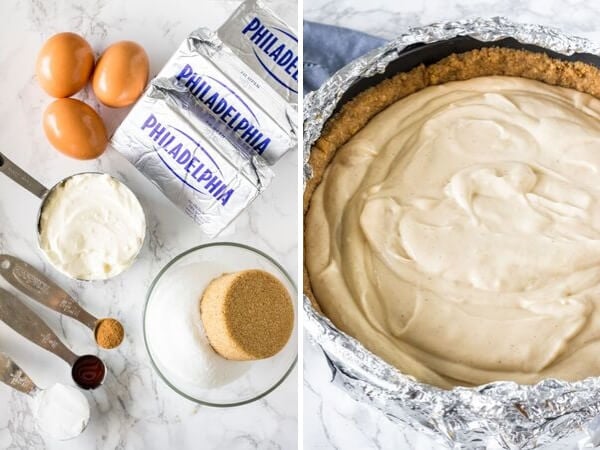 The cheesecake is baked in a water bath for about 60 minutes (more on that below). Then after it’s done baking and cooling, will need to chill in the fridge for at least 6 hours before serving.

Essentially, we’re making a butterscotch sauce. You’ll melt together the butter and brown sugar in a saucepan until the sugar is no longer grainy, and then whisk in the cream, vanilla, cinnamon and pecans. The mixture will bubble, the pecans will start to toast, and the sauce will thicken. 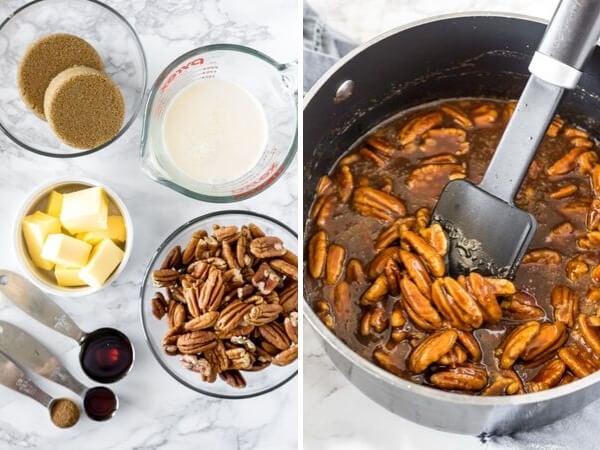 Then the warm mixture gets poured over the cheesecake before serving.

I always recommend baking a cheesecake in a water bath. This keeps in moisture, minimizes changes in temperature, and reduces the chance of the cheesecake cracking. In the recipe card below, I’ve written out the instructions of how to do this. Or the photo below also shows what the water bath looks like for reference. 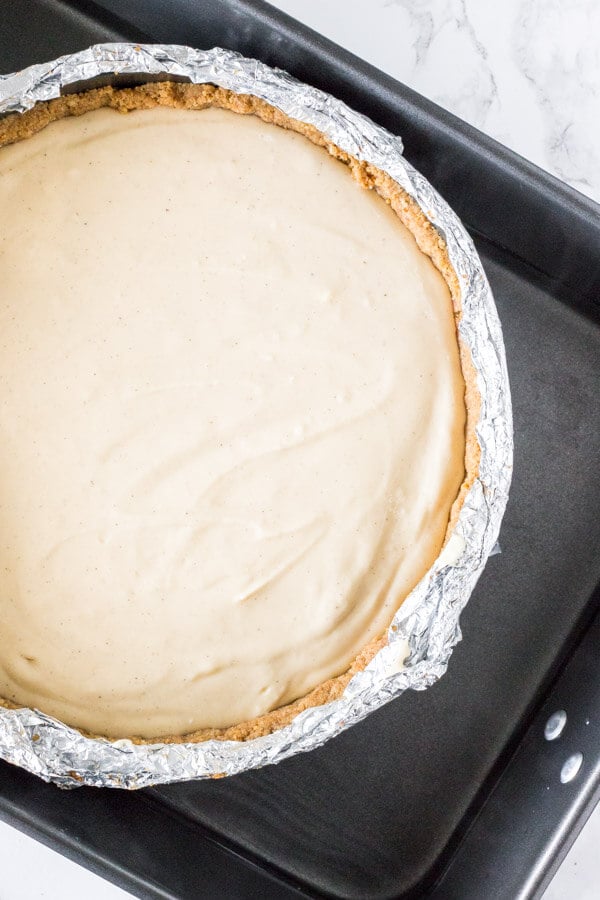 So to Recap Why You’ll Love this Pecan Pie Cheesecake 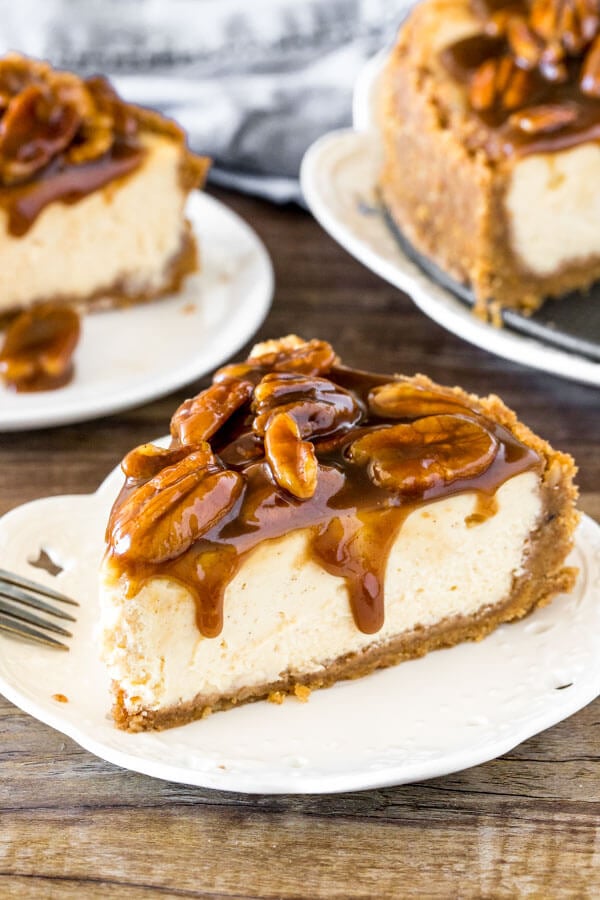 Or if you want a pumpkin pecan pie cheesecake – why not make my pumpkin cheesecake recipe, along with the pecan pie topping listed below.

Or for mall fall desserts, be sure to try: 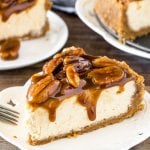 1 tablespoon cornstarch can be substituted with 2 tablespoons all-purpose flour. Cream cheese, sour cream, and eggs should all be room temperature before getting started. A 10-inch spingform pan can be used instead of a 9-inch pan. The bake time will be 5-10 minutes shorter. A 6-inch or 8-inch pan is too small for this recipe.  Store leftovers covered in the fridge. Make ahead tips: Make the cheesecake 1 day in advanced. Then make the pecan pie topping befor serving (about 1 hour before max for a gooey topping). If the pecan pie topping is refrigerated, it will harden. It is still absolutely delicious - but it will no longer be gooey and will be a bit more difficult to cut the cheesecake.