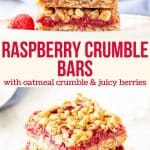 Sweet berries and oatmeal crumble – these raspberry bars are delicious. They’re perfect for a summer dessert with a scoop of vanilla ice cream, but they’re equally delicious as a picnic snack or for an afternoon tea.

If your favorite part of a fruit crisp or crumble is the actual crumble – then you’re going to love these raspberry crumble bars. The oatmeal base is thick and chewy with a delicious hint of brown sugar, then the middle layer is a sweet and juicy raspberry filling. But my favorite part is the topping – crunchy, cinnamon infused, and just plain delicious.

I love a good fruit bar – like my blueberry oatmeal crumble bars or strawberry crumb bars. Typically, I use entirely fresh berries with a little cornstarch, sugar and lemon juice added in for the fruit filling. However, because raspberries are so incredibly juicy – I had to change the fruit filling a little so that the bars wouldn’t get soggy. 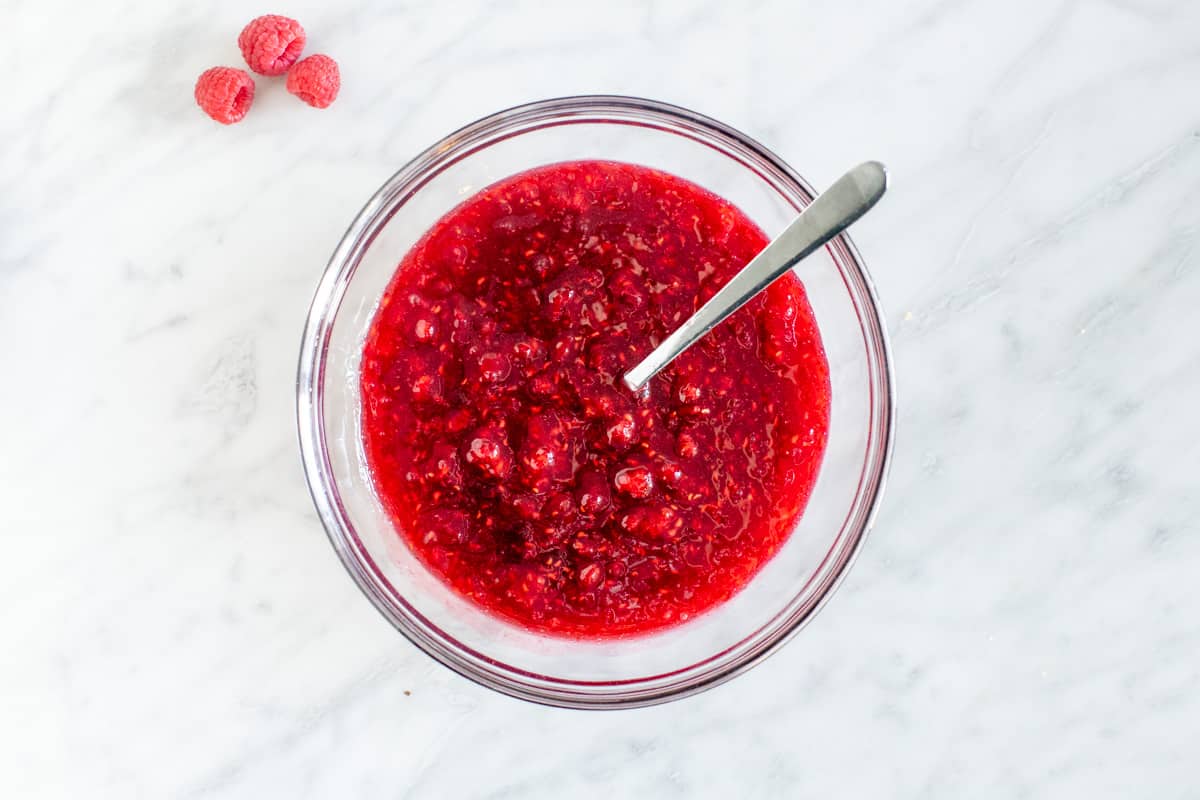 The oatmeal base actually doubles as the crumble topping. I like to use brown sugar because it adds so much flavor, then a little cinnamon really takes it up a notch. In this oatmeal crumble we’re using old-fashioned oats (AKA large rolled oats) for lots of texture. You’ll stir together  flour, brown sugar, white sugar, cinnamon, a little salt and the oats. Then you’ll stir in the melted butter and an egg. It shouldn’t feel like a dough per se, but instead it should clump together and form crumbles if you squeeze it in your hand.

Note: Substituting old-fashioned oats with quick oats is ok. Make sure you don’t use instant oats or steel-cut oats as they won’t perform the same. 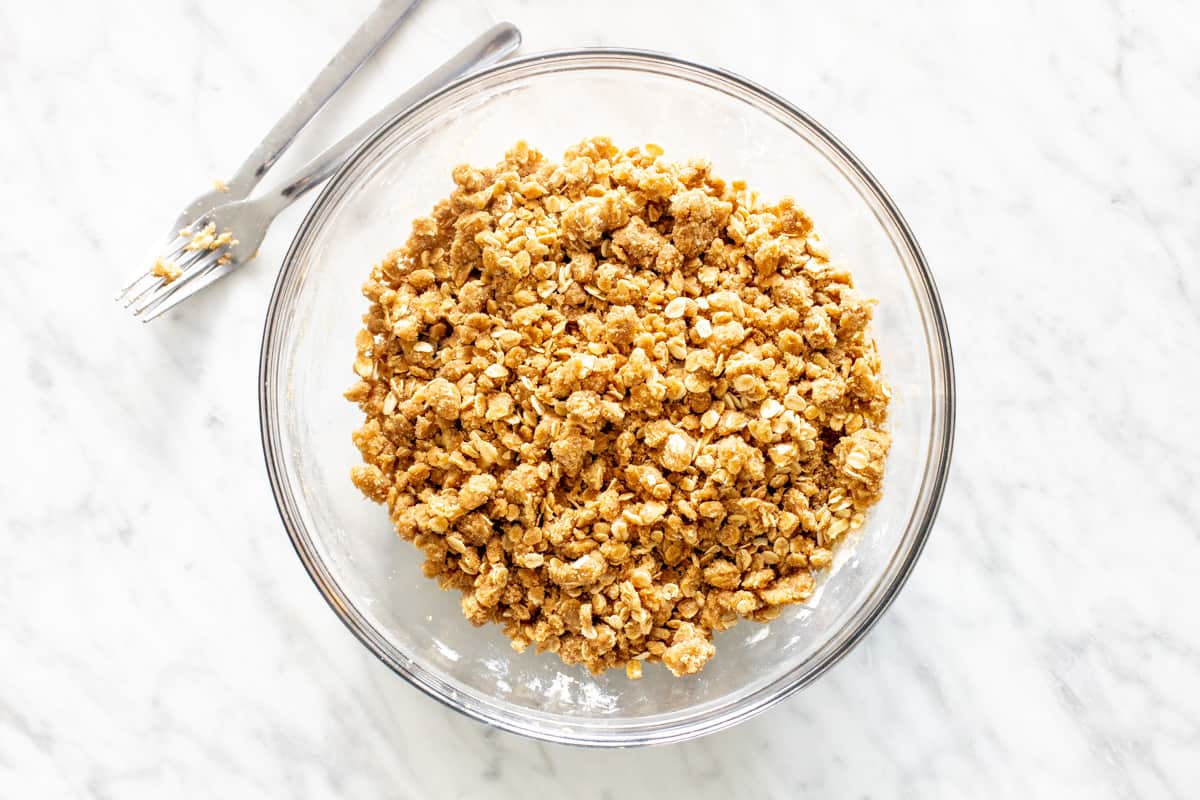 The oatmeal base is firm to ensure the bars don’t get soggy and the filling is nice and juicy. When you add the crumble on top, it may look like a lot, but it really won’t be after you bake the bars.  The bars will bake for about 50 minutes. When they’re done baking, you’ll see some of the raspberry filling bubbling around the edges or slightly through the crumble topping and the crumble will look nice and golden brown. You can see what mine looked like below. 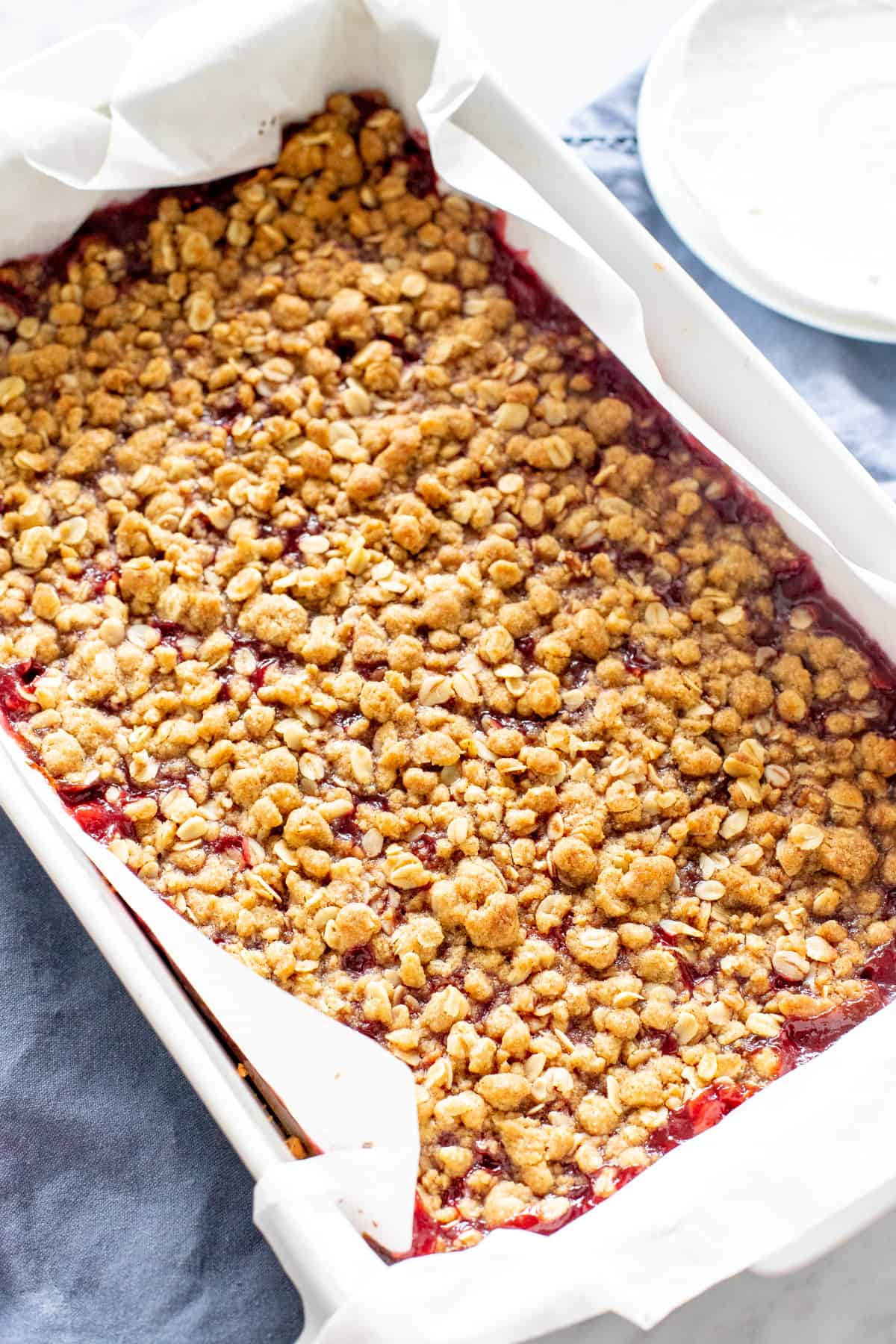 Note: It’s really important for the bars to be 100% cooled before slicing. Otherwise, you can end up with a bit of a mess.

This recipe can be halved and made in an 8×8 inch pan. When halving the recipe, simply use 1 egg yolk (instead of the 1 egg for the full batch). The bake time will be about the same.

Love fruit crisps & crumbles? Then make sure to try: 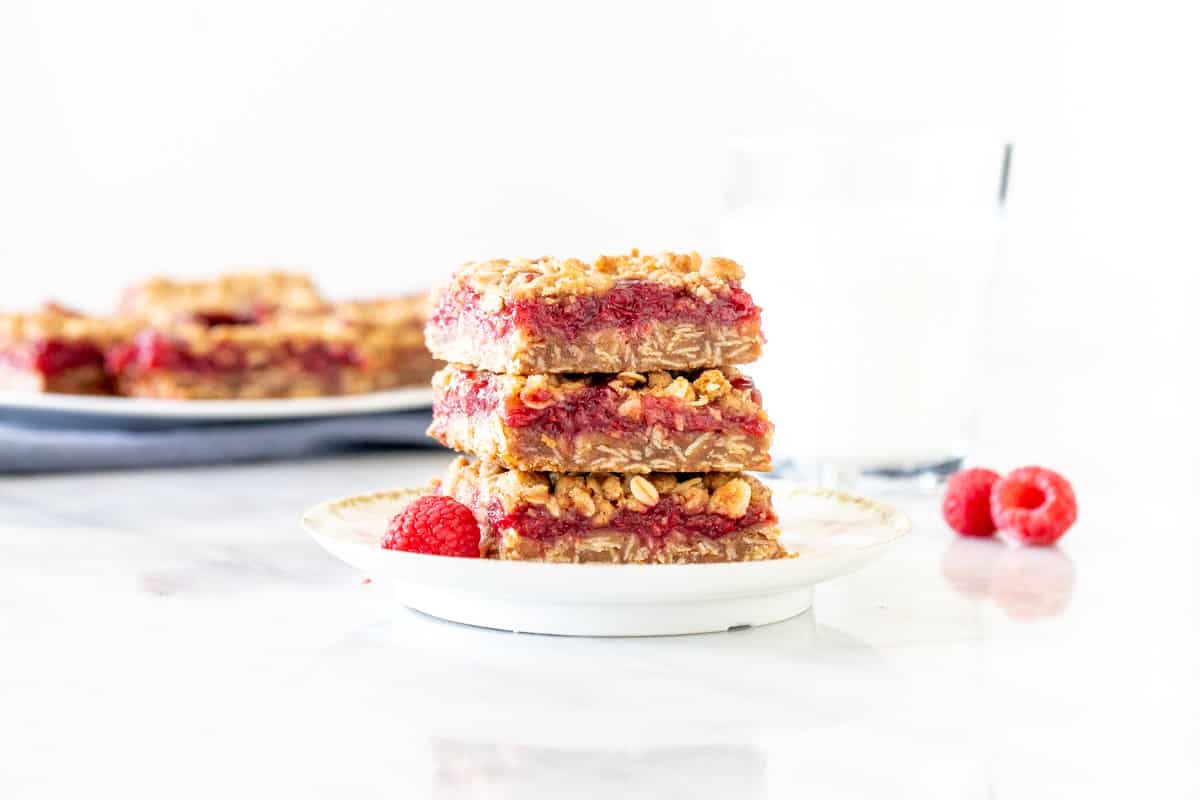 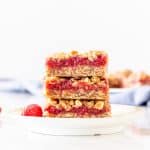 Assemble and Bake the Bars 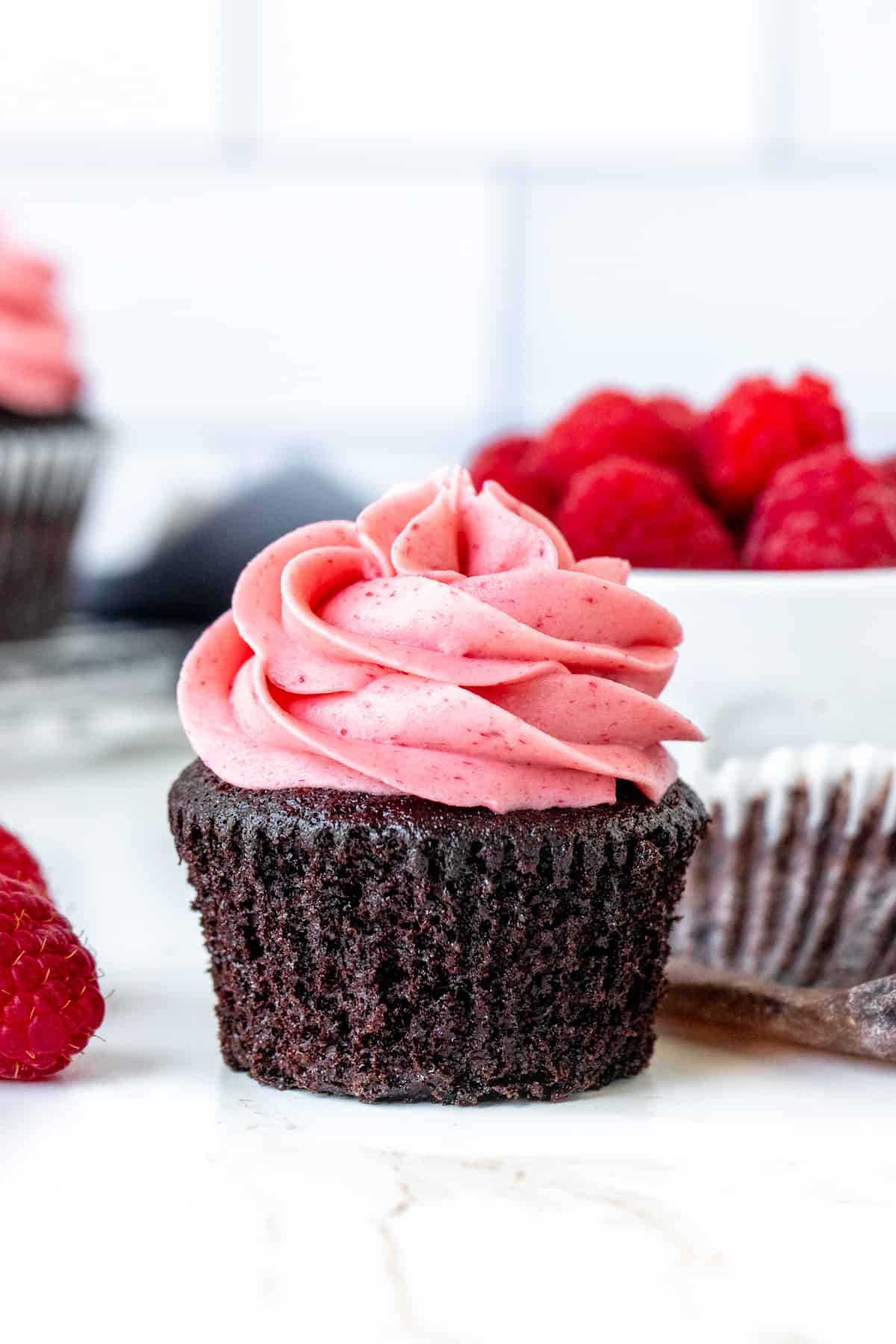 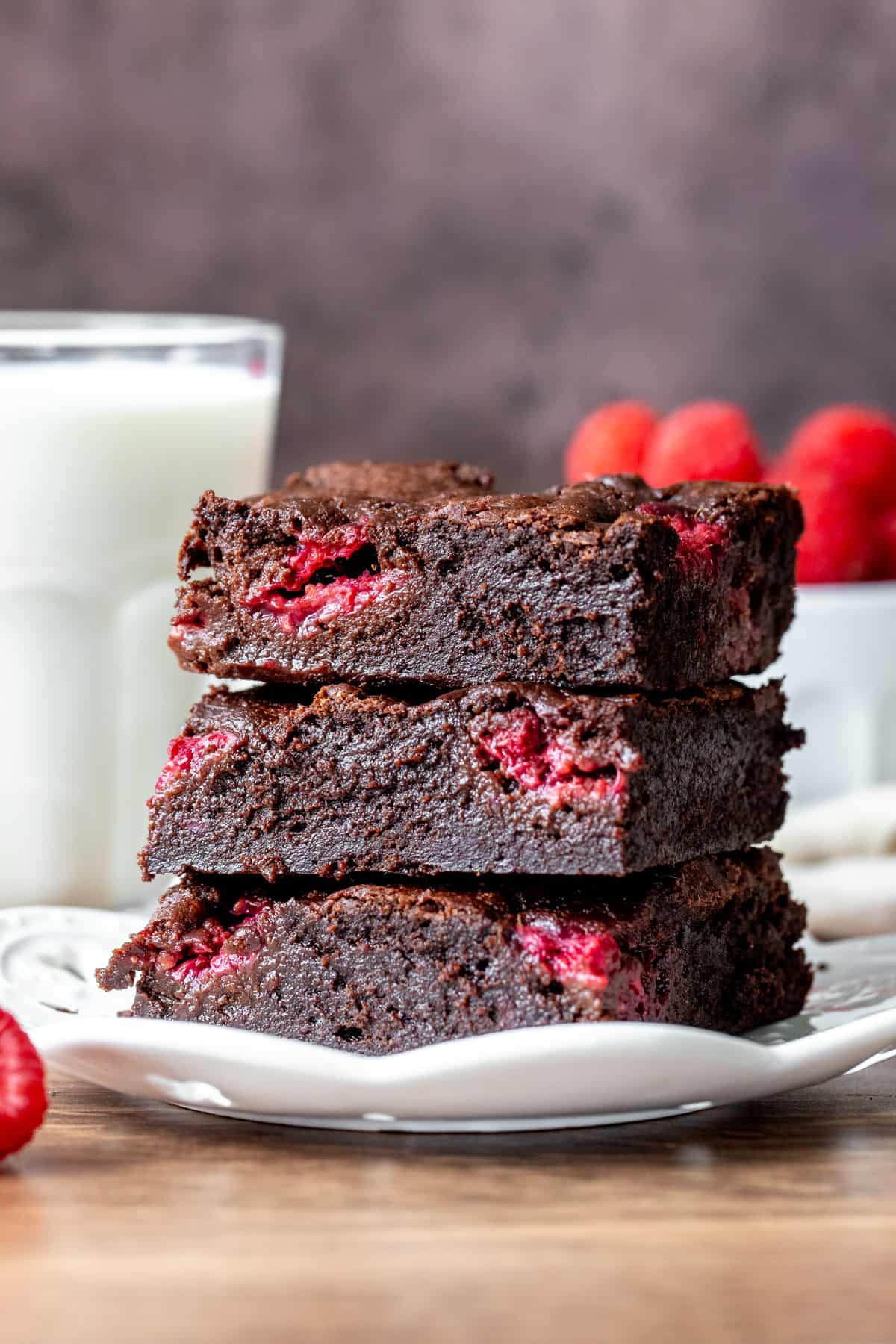