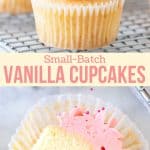 This small-batch vanilla cupcake recipe makes 6 cupcakes. They’re moist, tender and won’t leave any leftovers. Specifically designed to make a half batch of cupcakes that turn out perfectly every time.

If you need a vanilla cupcake recipe with a buttery vanilla flavor and a moist, soft cupcake crumb – then these small-batch vanilla cupcakes are perfect.  I hate throwing out leftovers – and since cupcakes can dry out after a few days – this recipe is ideal.

Why Can’t I just Half My Favorite Cupcake Recipe?

When it comes to baking, you can’t always half a recipe (or double a recipe for that matter) and get the same results. Getting the perfect cupcakes isn’t just about ingredients – it’s also about the process and technique. When it comes to dividing a cupcake recipe in half, I find that this almost always leads to overmixing. Overmixing your batter (especially after the dry ingredients have been added) causes tough, dry cupcakes. It can also cause cupcakes with pointy tops.

Now I love my favorite vanilla cupcake recipe. But I definitely found that if I halved the recipe my cupcakes definitely didn’t turn out light and fluffy. Tears may have been shed.

And that’s where this recipe comes in. 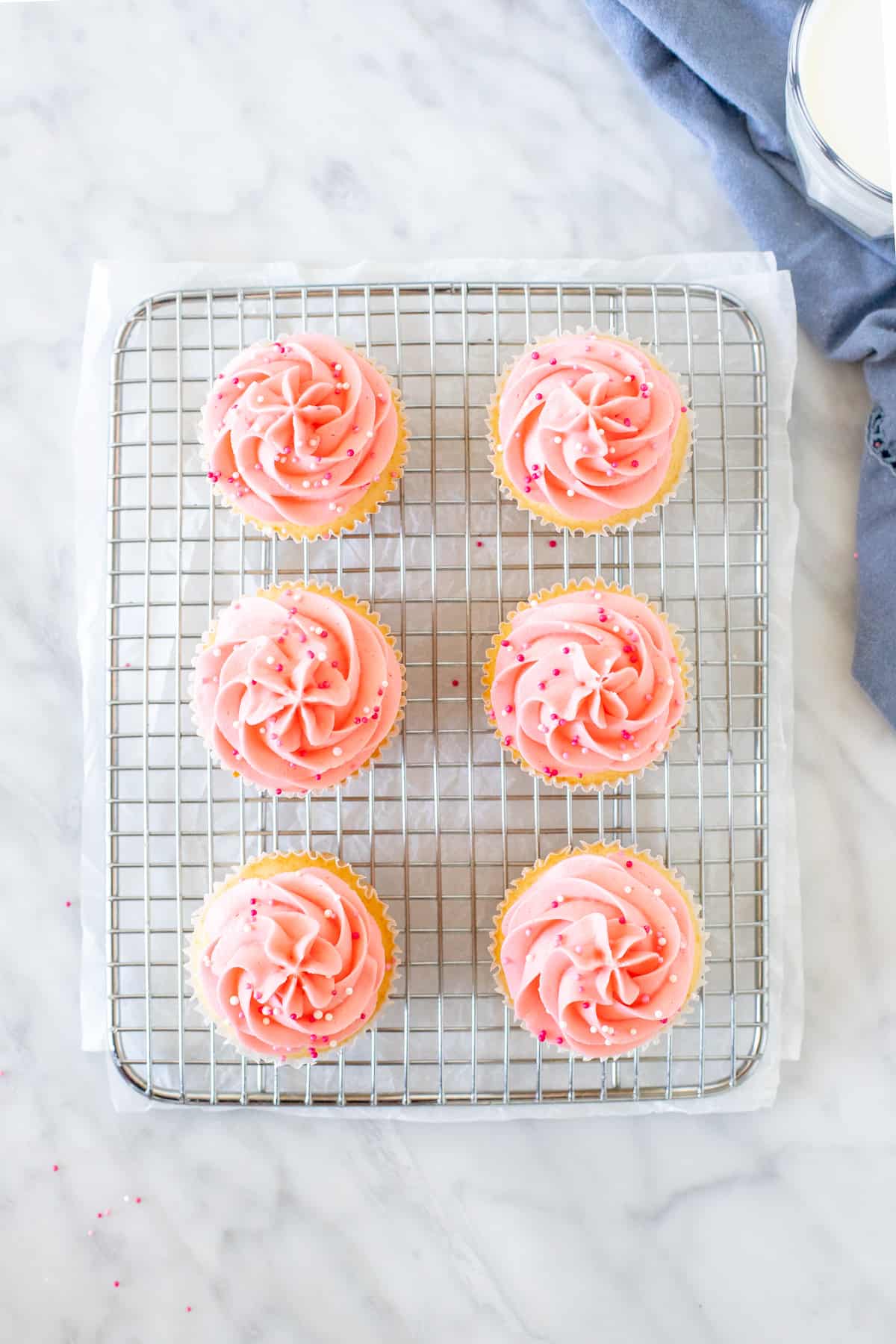 Instead of starting off by beating together softened butter and sugar – like in most vanilla cupcake recipes – first, you’ll beat the egg and sugar. You want to whip the mixture until it’s very pale in color and increased in volume significantly – about triple the original volume.  This process aerates the egg and helps the cupcakes stay light and fluffy. The dry ingredients get gently whisked into the batter. Then in goes melted butter, warm milk and a little vanilla extract.

This process is different than many vanilla cupcake recipes, but it really avoids the likelihood of the batter being overmixed once the dry ingredients are incorporated. It also means that you don’t need to wait for the butter to soften to room temperature before getting started.

You’ll divide the cupcake batter between 6 cupcake liners – they should each be about ⅔ to ¾ full. Note that if you haven’t whipped the eggs and sugar enough, you may only get 5 cupcakes. Then they’ll go in the oven to bake.

Note: If you have a convection oven, be sure that the temperature is adjusted to 25F degrees lower (325F instead of 350F). Many ovens do this automatically, but some do not.

I used a simple vanilla frosting for these cupcakes. Note that I included enough in the recipe for each cupcake to be piped sky-high with frosting. If you want a more reasonable amount and want to frost each with a knife, you can half the frosting recipe. I’ve included the amounts in the recipe notes for you. 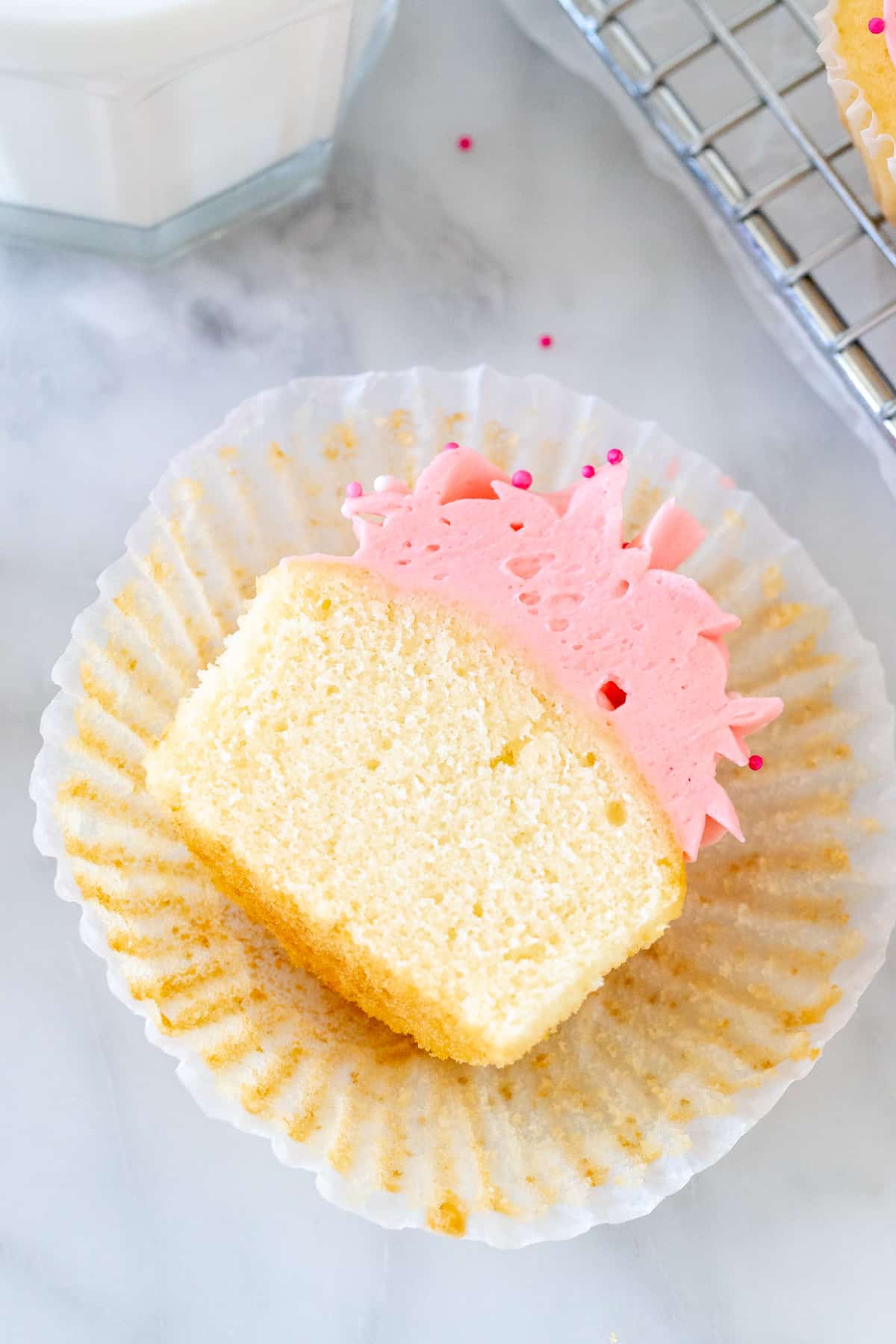 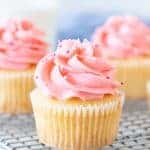 Vanilla Frosting - if you like less frosting, feel free to half this recipe*