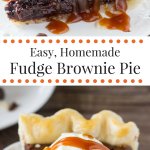 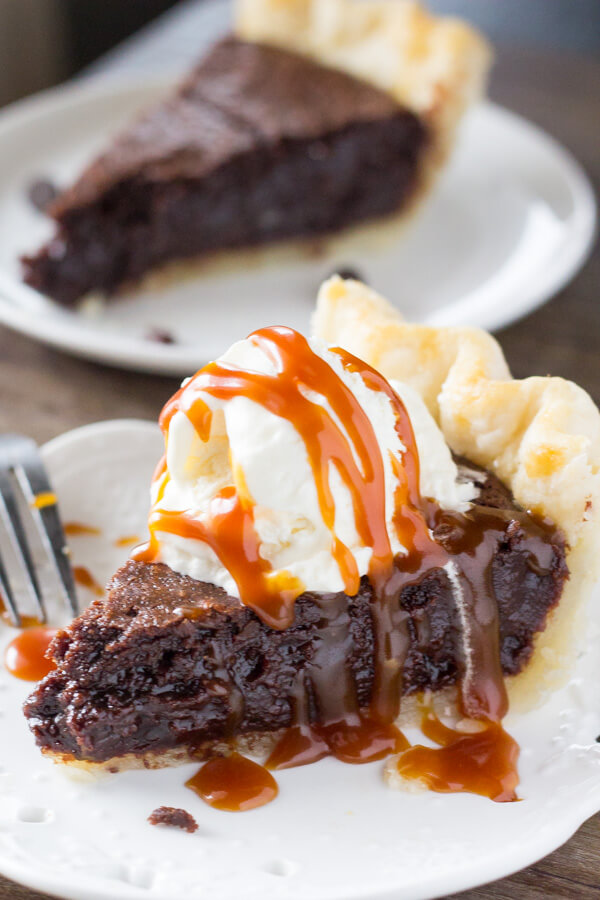 I’m not much of a pie baker. And since I know so many people that are – I usually decide to cut my losses and stick to cake instead.

I’ll leave the pies to all the grandmas who can whip up flaky pie perfection without a recipe, eyes closed, in 20 minutes flat. And maybe in 40 years if I become a grandma, I’ll magically get that apple pie baking gene.

But I have a weakness for brownies. And when I got the idea of making a brownie pie – I knew it was time to face my pie crust fears. Because a fudgy, super chocolate-y brownie encased in flaky pie crust is clearly a necessary life goal. And a perfect way to foray into the realm of pie without facing the stiff competition.

Introducing, Fudge Brownie Pie. It’s dense, it’s chocolate-y, it’s fudgy, it has a flaky pastry crust, and it’s the perfect way to take your brownies up a notch. You can turn it into a brownie pie sundae with ice cream and caramel sauce if you’re going for the ultimate in decadence, or go the minimalist route with fresh berries. Either way – it’s brownie heaven. 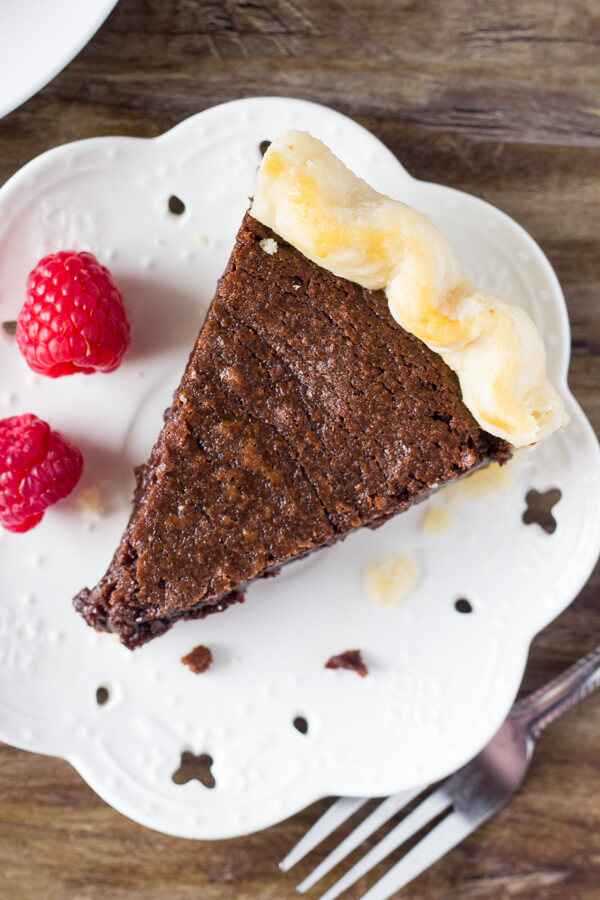 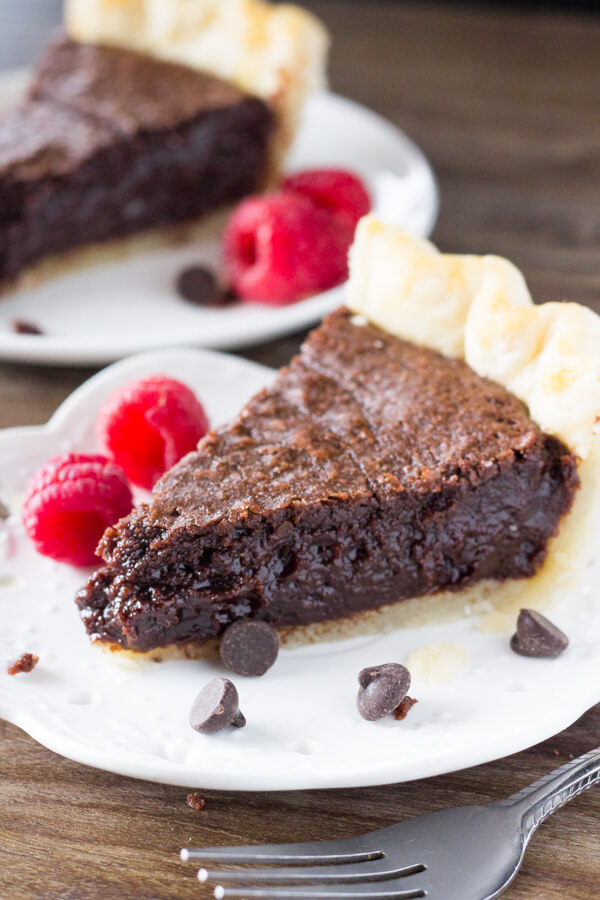 For the Flaky Pie Crust

Now, for this recipe I decided to stick with an all-shortening pie crust. When making pie crust you can use butter, shortening, or a combination of the two. Shortening is far more forgiving than butter and gives the flakiest texture – but butter adds more flavor. Since the brownie is so rich already, I decided to use an all-shortening pie crust since it’s easier to work with and I didn’t miss the extra butter flavor. Feel free to use a different pie crust recipe if you have a personal favorite – or you can use a pre-bought, refrigerated pie crust if you’re looking to save time. If it’s frozen you’ll need to dethaw it in the fridge before getting started. (Note- you don’t need to bake the pie crust first. The brownie batter gets poured into the unbaked crust, and everything is baked together).

Here’s what mine looked like before it went into the oven. 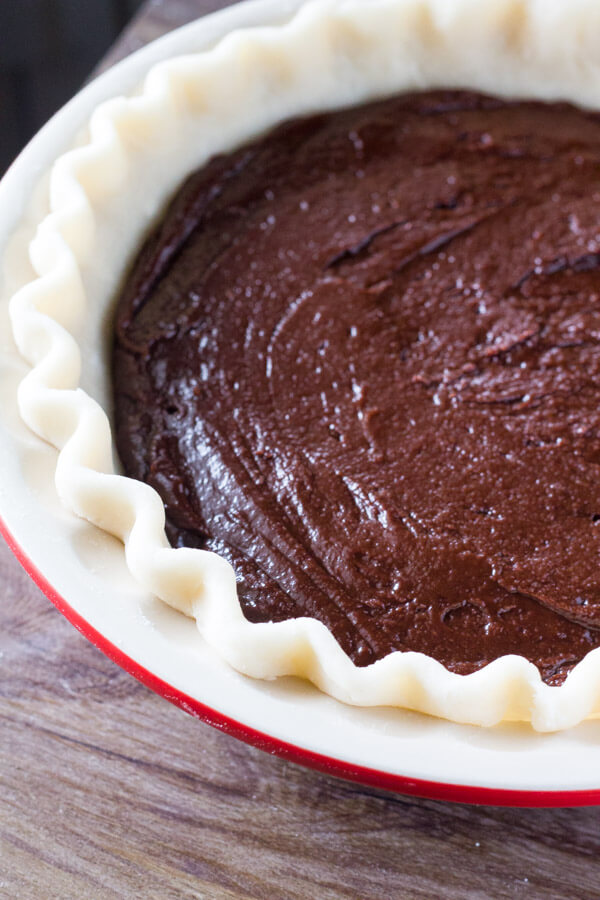 For the Fudge Brownie

Now did someone say chocolate??? Because these brownies are for the true chocolate lover. They’re gooey, decadent and ridiculously fudgy – which is exactly how you want a brownie pie to be. Now, to make the brownie extra fudgy we’re using melted dark chocolate instead of cocoa, adding an extra egg yolk, and keeping the flour to a minimum. More flour leads to cakier brownies. I used 70% dark chocolate in this recipe for a rich chocolate flavor, but if you’re serving these to children I’d choose 50% or 60% dark chocolate instead. Then to keep the brownie gooey, we’ll bake the brownie pie for about 30-35 minutes. The top will look set and no longer shiny when it comes out of the oven, but the inside will still be gooey. The pie crust actually insulates the brownie while it’s baking – so you get extra fudge brownie deliciousness. 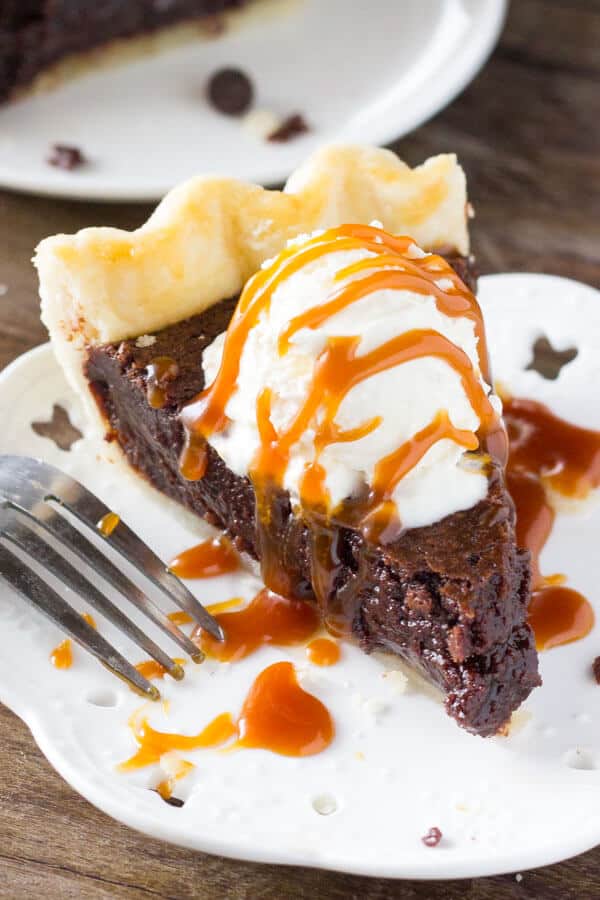 If you’re looking for an extra special birthday dessert for a true chocolate lover – this brownie pie is the perfect option. Or you know… if it’s Monday and you’re facing 4 more days of life before the weekend. 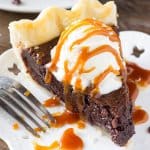 For the Pie Crust

To Make the Pie Crust