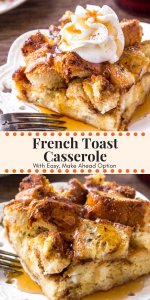 This French Toast Casserole with cinnamon sugar topping is soft and fluffy on the inside, and golden brown on top. It can be refrigerated overnight or baked immediately for a delicious breakfast that feeds a crowd.

If you love French toast – then you need to try this French toast casserole. It’s a delicious take on French toast that’s extra fluffy, filled with cinnamon, and perfect for soaking up lots of maple syrup.

Plus – you skip the hassle of having to stand over the griddle frying each piece of bread individually. Instead, all the ingredients get tossed into a large casserole pan. No fuss, no frying, just delicious French toast bake.

You end up with the fluffies french toast around that’s filled with cinnamon and caramelized on top. What I also love about this French toast casserole is that it’s extra good at soaking up maple syrup. (We’re not worrying about calories here).

How to Make French Toast Casserole 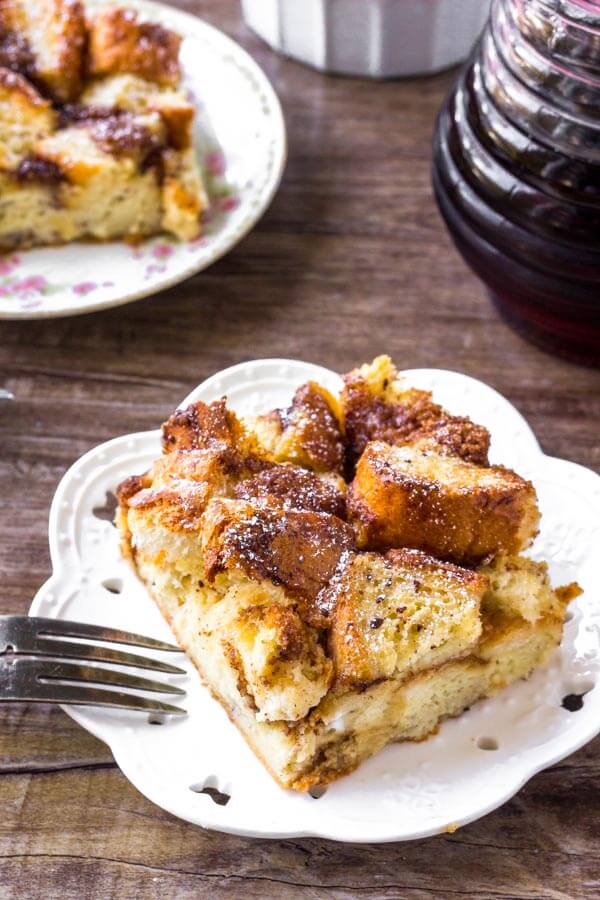 Making this French Toast Casserole is actually easier than making regular French toast. First, we slice the bread into little squares. I like to use brioche bread but any kind of fluffy, thick-cut white bread will do the trick. Hawaiian bread, Italian bread or a French loaf work perfectly too.

Then place the bread into a greased casserole dish. You’ll want to use a 3-quart dish for this recipe. A glass 9×13 inch pan will work, or you’ll see the one I used in photos has rounded edges. 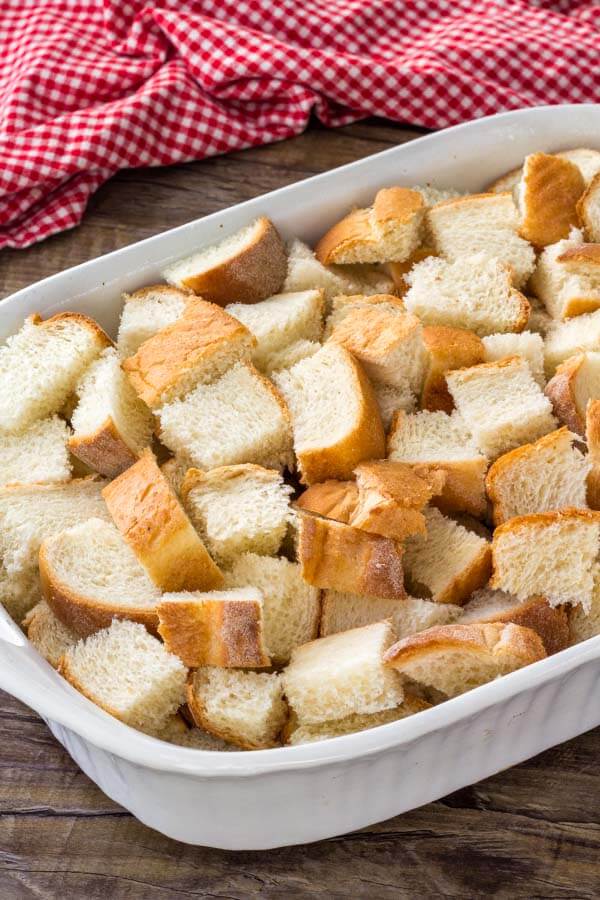 Then we make the French toast batter by whisking together milk, eggs, a little sugar, a little butter and cinnamon. I like to add a little sugar and butter to my french toast because they add flavor and help to caramelize the top. Then cinnamon is always key 😉 Then pour the batter over top of the bread so it’s evenly coated.

Last but not least, I like to add a little drizzle of buttery cinnamon sugar drizzle to the top. It’s made by whisking together melted butter, brown sugar & cinnamon. Then simply drizzle it over top. Here’s what mine looked like: 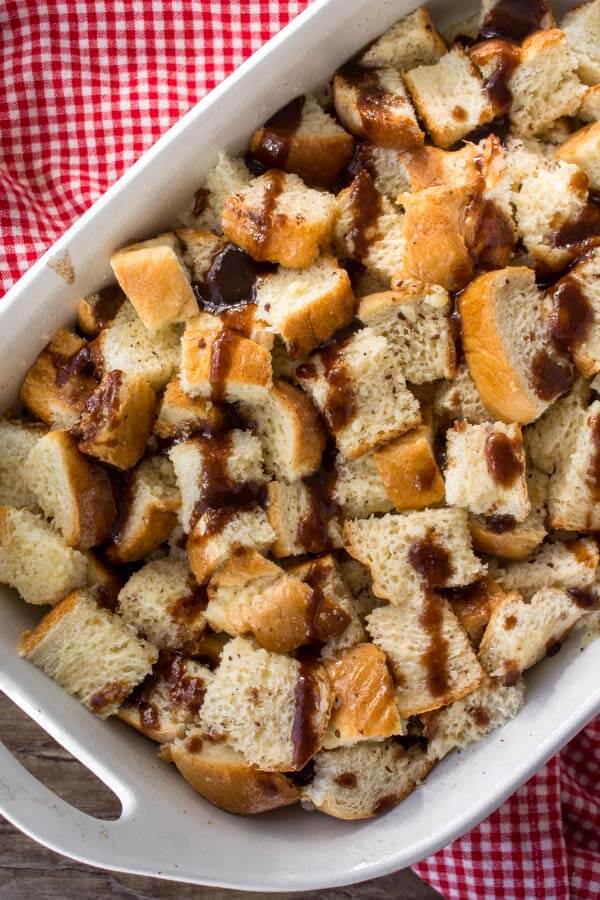 Now at this point, it’s totally up to you. You can either bake it immediately or turn it into overnight French toast casserole.

After preparing the French toast bake, cover the pan in aluminum foil and place in the fridge. Then when you’re ready to bake preheat the oven to 350F degrees. Bake for 30 minutes covered with the aluminum foil, then remove the foil and continue baking for 15 minutes until the top is golden. You can make the casserole up to 24 hours in advance – however, I wouldn’t prepare it any longer than this or else the bread can get too soggy.

Once it’s done baking the top will be golden brown and completely delicious. You can even add a little sprinkle of powdered sugar overtop before serving. 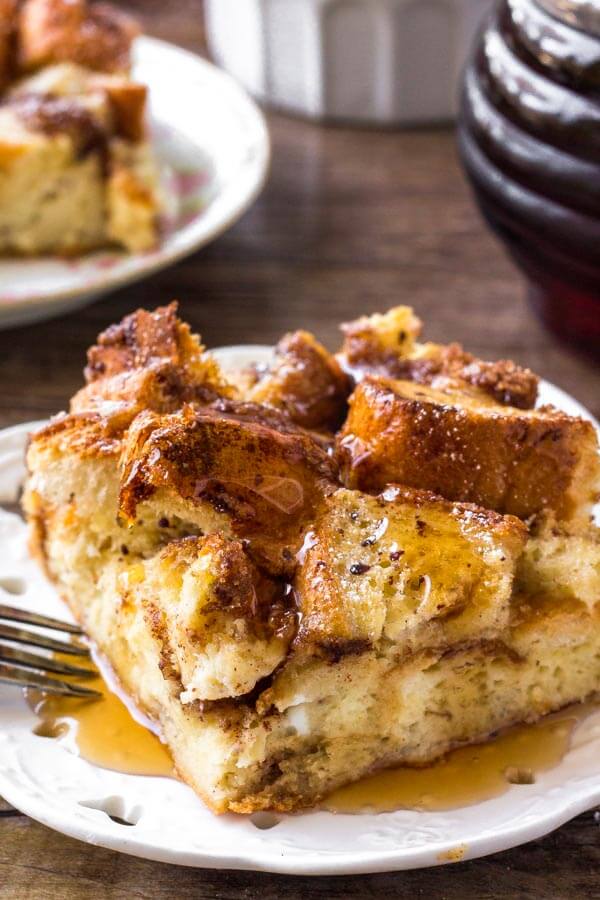 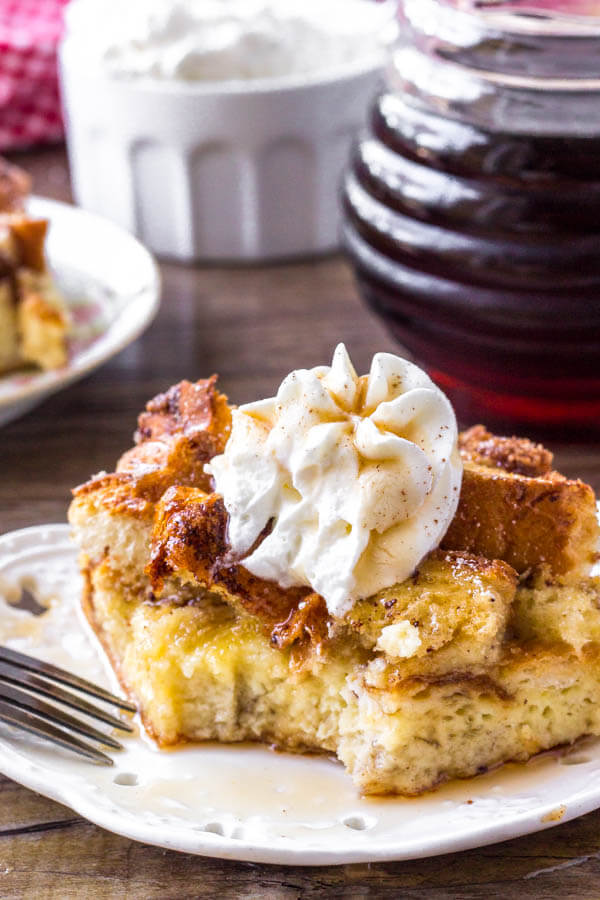 French Toast Casserole with cinnamon sugar topping is soft and fluffy on the inside, and golden brown on top. Make it overnight and bake in the morning, or you can prepare it in the morning and bake it immediately. Either way - it's the perfect breakfast for a crowd.
Prep Time20 mins
Cook Time35 mins
Total Time55 mins
Course: Breakfast
Cuisine: American
Keyword: Breakfast Recipes, French Toast, French Toast Casserole
Servings: 12 people
Author: Fiona Dowling

*I recommend baking this covered with aluminum foil for the first 30 minutes because otherwise the top can burn but the inside won't be cooked yet.  **Store leftovers in an airtight container in the fridge. Warm in the microwave before enjoying.
Made this Recipe?Make sure to tag @JustSoTasty on Instagram or hashtag #justsotasty!