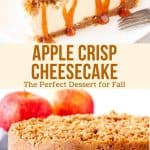 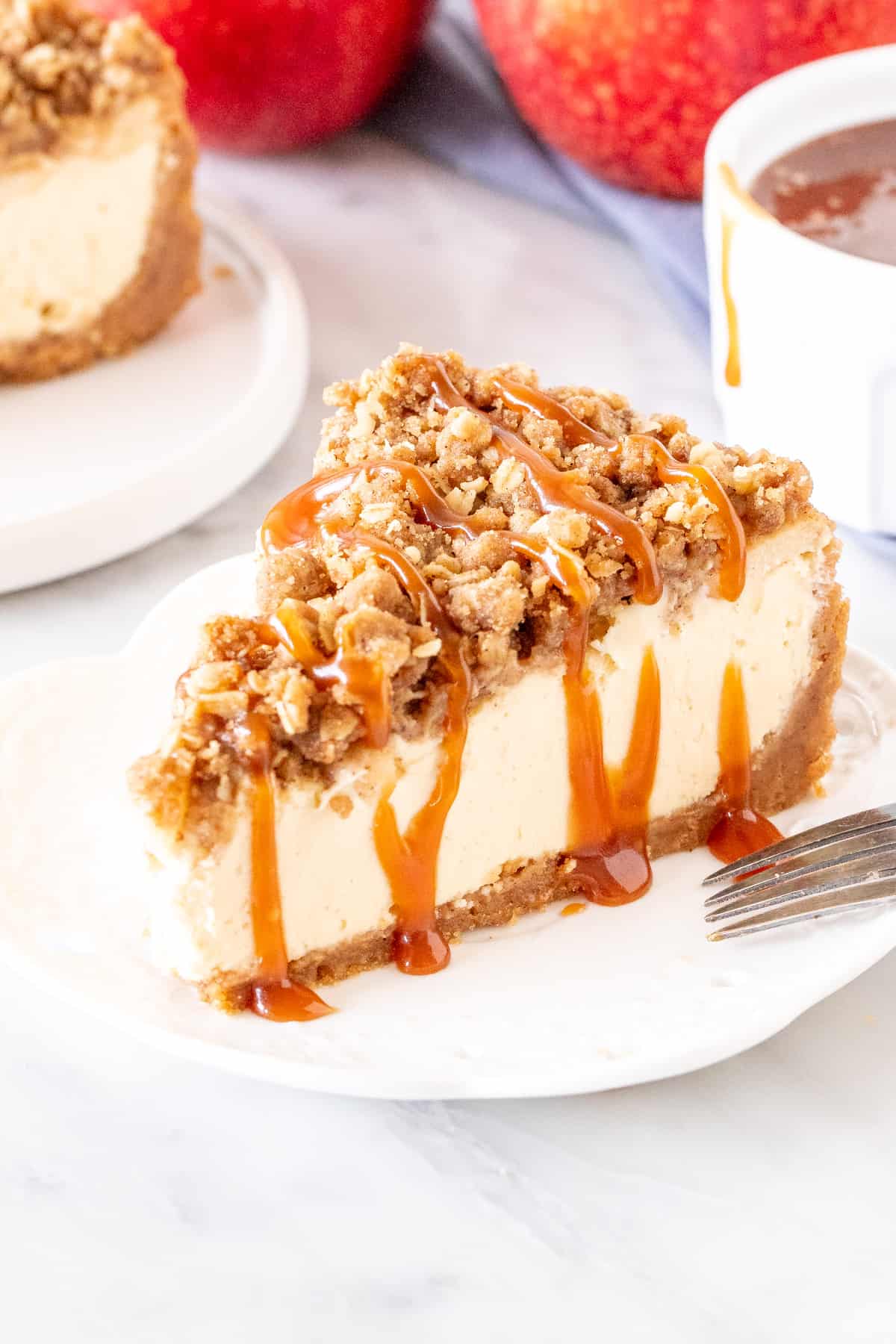 This recipe combines two classic desserts – apple crisp and New York cheesecake. You get the best of both worlds and end up with a decadent cheesecake that’s perfect for apple season or Thanksgiving. The cheesecake itself is extremely smooth and creamy. It’s supported with a thick and crunchy graham cracker crust that has a hint of cinnamon. On top of the cheesecake is a layer of sweet, cinnamon apples. Then oatmeal crisp topping is sprinkled on top.

The apple crisp flavor and tangy cheesecake flavor meld together perfectly, and you’ll love how the creamy cheesecake texture combines with the crunchy crust and crisp topping. You can also add a drizzle of salted caramel sauce if you really want to take it up a notch. 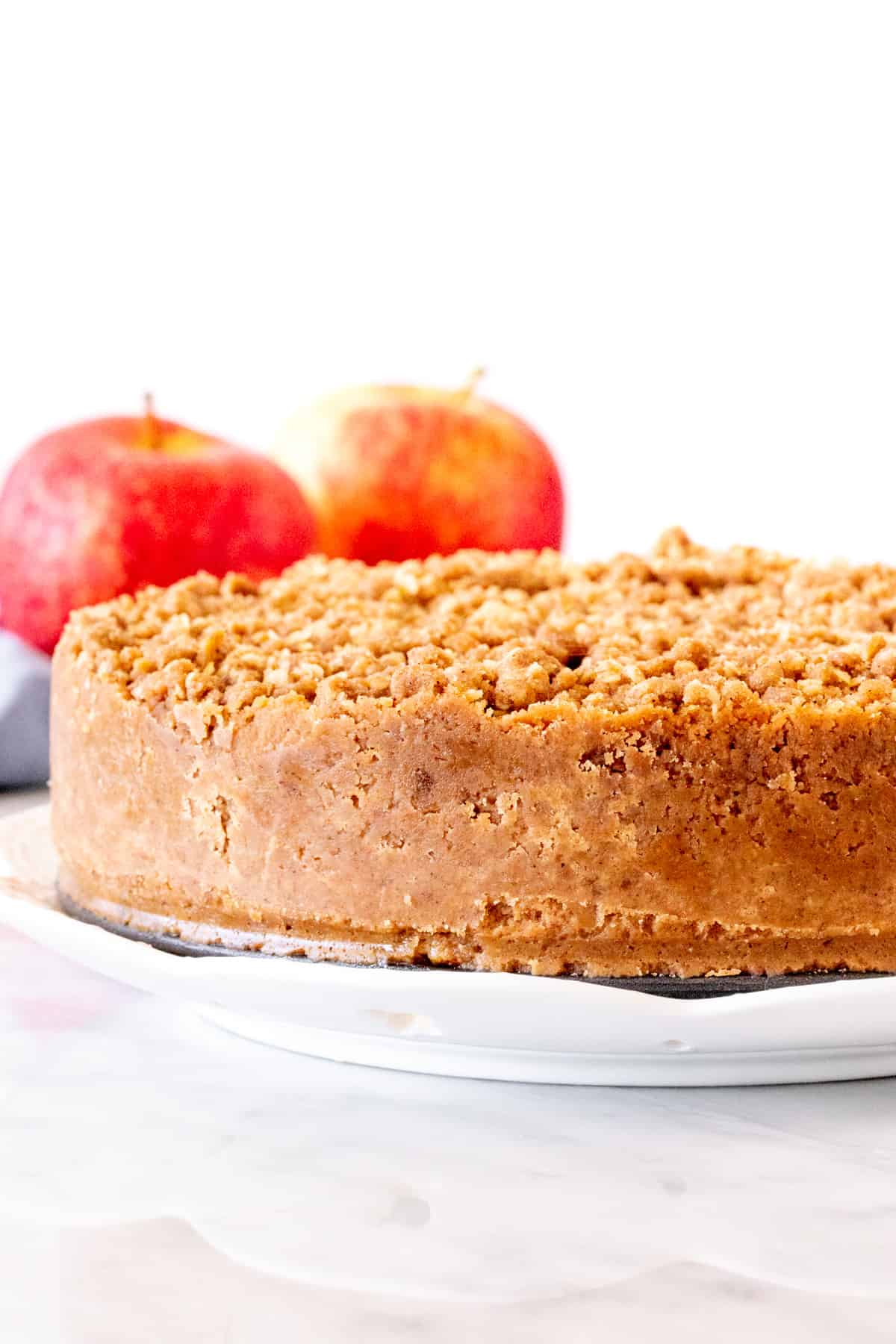 This recipe has 4 parts to it: the crust, the cheesecake batter, the cinnamon apples and the crisp topping. Therefore, it does take some time to make. Like any cheesecake recipe, it will need to chill in the fridge for at least 6 hours after its baked. Therefore, I recommend making it the day before you plan to serve.

You’ll first make the crust by combining crushed graham crackers, a little brown sugar and a hint of cinnamon. Then you’ll stir in melted butter to create a something that feels like wet sand. The mixture gets pressed into the bottom and about ½ way up the sides of your pan, and then baked on its own for 10 minutes. Baking the crust on its own helps to keep it crunchy and sturdy.

Then as the crust is baking, you can get on with the filling, apples and crisp topping.

I always make the apple mixture and crisp topping first so that they’re ready to go as soon as you have the cheesecake filling done. For the apples, you’ll peal 2 large apples and slice them thinly. Then toss them with brown sugar and cinnamon.

The crisp topping is made with flour, brown sugar, cinnamon, quick oats and melted butter. It should be crumbly and stick together if you squeeze it in your palm. Note that for this recipe, I like smaller crumbles because it makes it easier to slice the cheesecake after its baked. Therefore, I use quick oats instead of old-fashioned oats.

The cheesecake filling itself is very simple and you’ll find familiar if you’ve ever made a baked cheesecake. You’ll beat the cream cheese and sugars until smooth, then mix in a hint of cinnamon and corn starch. From there, mix in the sour cream and vanilla extract. Then mix in the eggs 1 at a time. We’re using a little brown sugar and cinnamon in this recipe to complement the apple topping and add more flavor. The corn starch helps to set the cheesecake and reduces the risk of cracking. 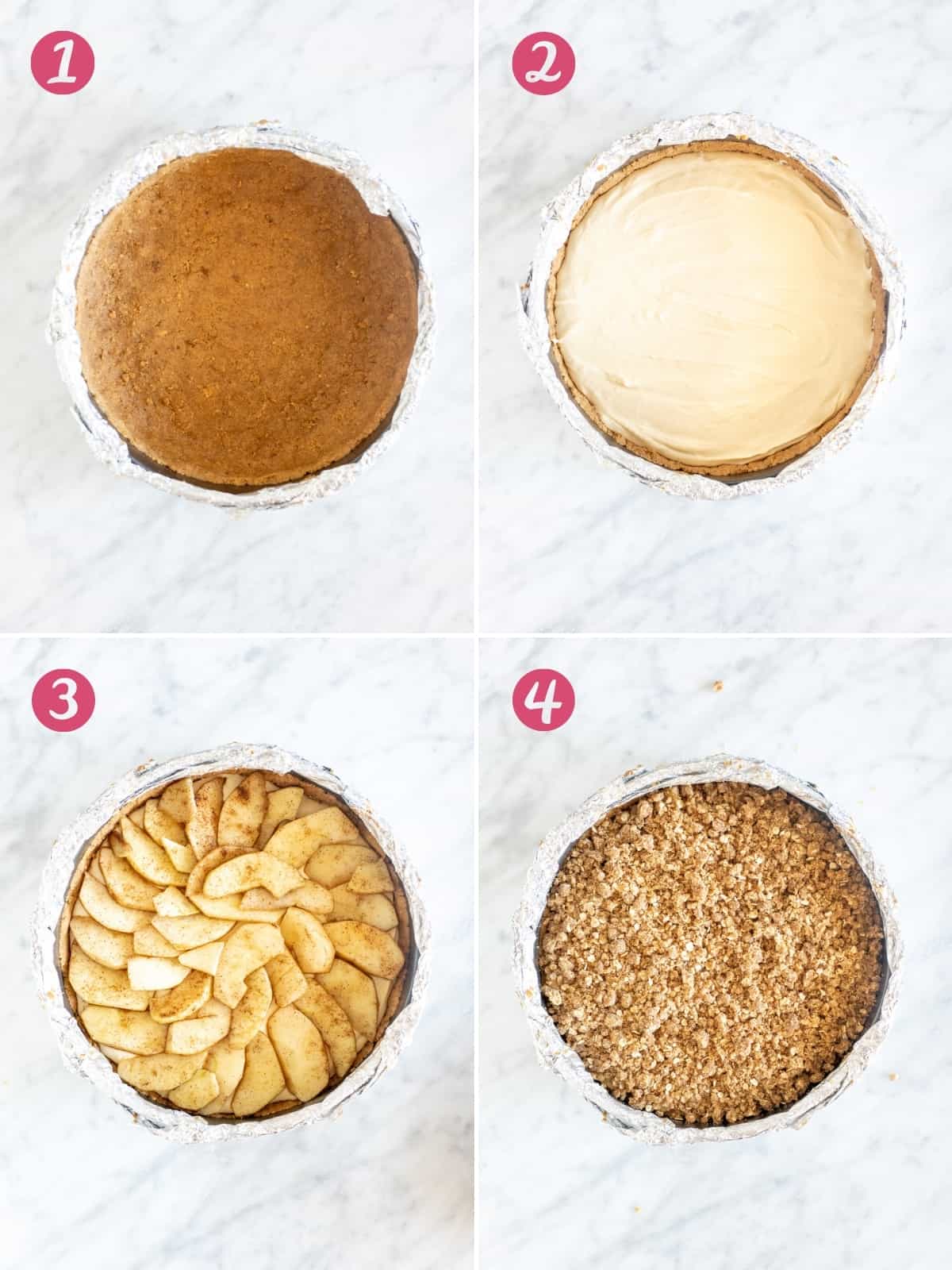 Note: I tried putting the apples on the bottom, but it made the crust soggy. So I definitely don’t recommend it.

You’ll notice in the photos above that I have the cheesecake pan wrapped in tin foil. That’s because this cheesecake is baked using a water bath. The water bath method helps to keep in moisture to  give the cheesecake a silky smooth texture. It also minimizes changes in temperature, which therefore reduces the risk of the cheesecake cracking. Before making the crust, you’ll wrap the outside of a 9-inch (23-cm) springform pan. You need to wrap the pan at least 3 times so that all the seams are covered. The unbaked cheesecake (with the pan wrapped in foil) is placed in a large roasting pan, then about ½ – 1 inch of boiling water is poured into the roasting pan. Then the whole thing goes in the oven to bake.

Note: When you bake the crust on its own, you don’t need to bake it in the water bath. 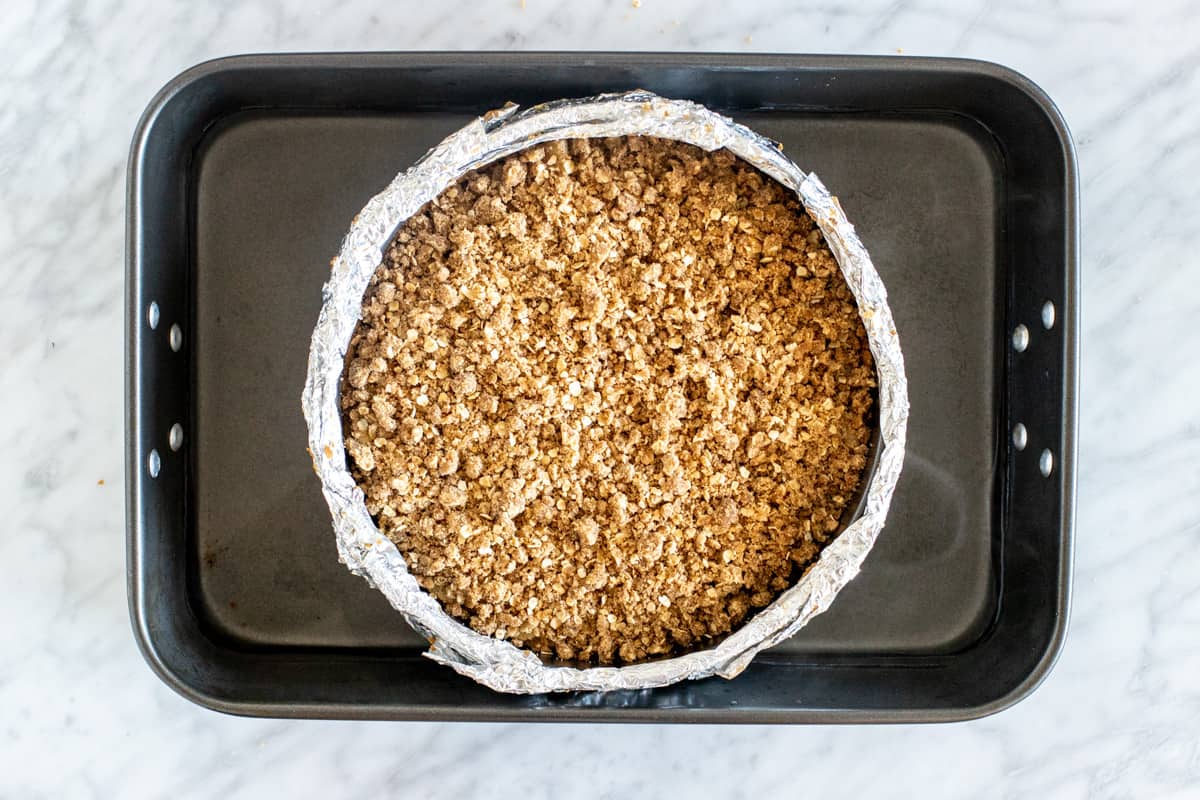 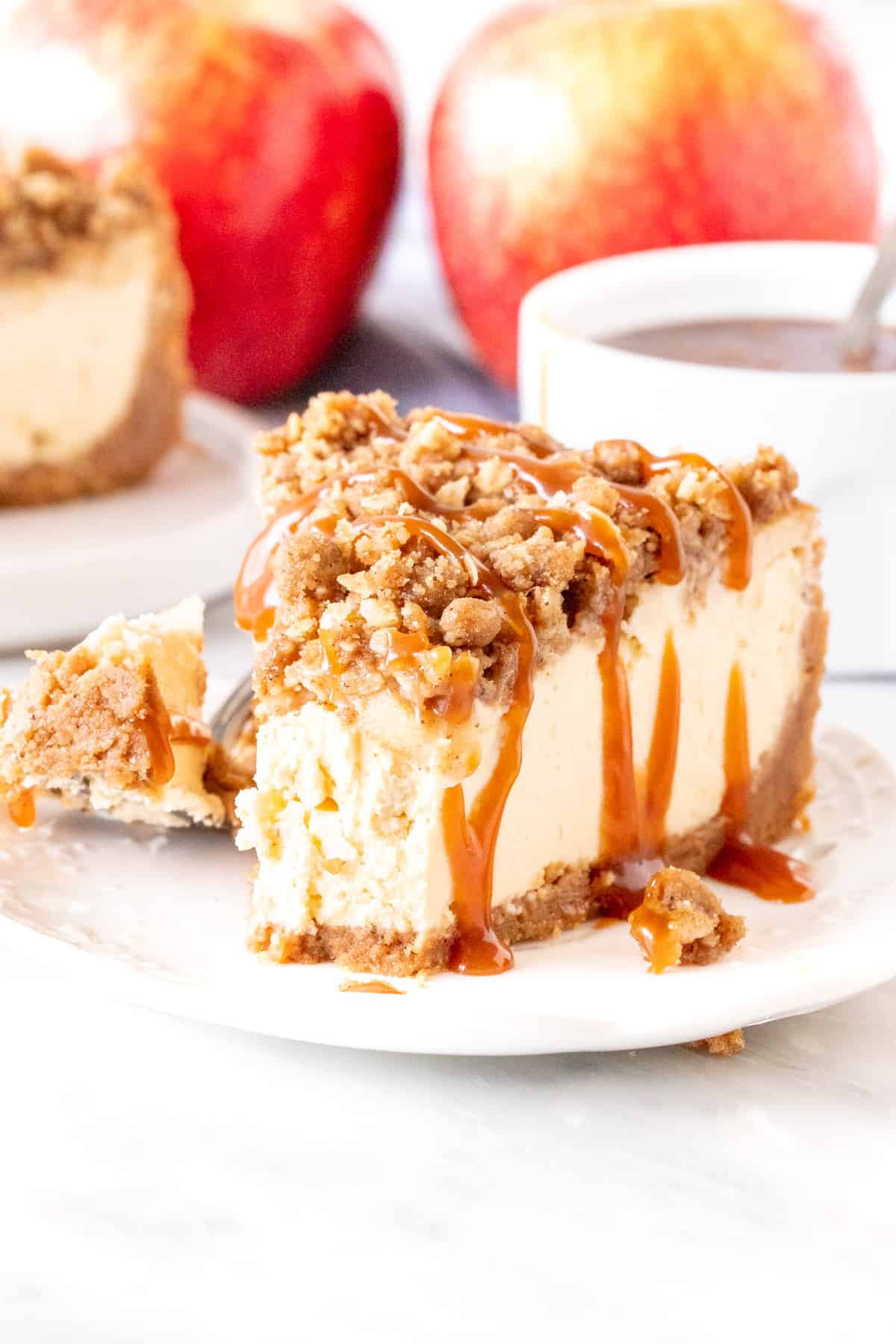 More fall cheesecake recipes to add to your baking list: 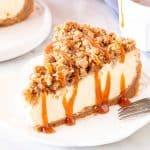